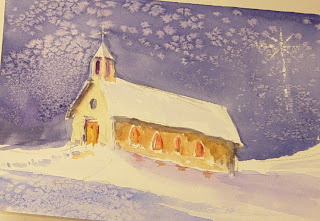 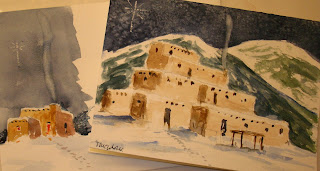 Watercolor Christmas cards from previous years...when It is the season...

Remember when we'd gripe if the decorations and sales were up just a little before Thanksgiving?

Recession-bit retailers are desperate this year. It just isn't overkill--its genocide of a holiday.

Remember when, as a kid, you looked forward to Christmas coming a long time? That's because it was special. You didn't get new toys very often, and the anticipation built.

Now there's no anticipation at all. And rather than being a "holiday," it's become a harassed obligation that depletes the pocketbook and destroys cheer and relaxation.

I know it's still big for little kids, but it won't be long until they grow tired of it too. By the time they're teenagers, Christmas becomes old hat.

Jennifer Henry, Susan's sister-in-law, posted something on Facebook yesterday about "Keeping Christ in Christmas." I wish that were possible, but Americans tend to worship material goodies at this time of the year. WalMart has already made plans for "Black Friday" the day after Thanksgiving. A shopper was trampled to death in one of their stores last year by unruly customers trying to get the best deals first. At UCO and other state institutions, "Merry Christmas" has been replaced with "Happy Holidays." I don't have a problem with that, but I love to put "Merry Christmas" on my Christmas cards that I send across campus. I expect it raises some eyebrows, and I take joy in not following the crowd. I need to work on my Christmas spirit, don't I. But others have told me they appreciate it.

It'd be worth asking how we could restore the spirit of Christmas to it. How about driving around at night with the kids looking at the lights? How about having the family or friends over for hot chocolate and popcorn and listening to Christmas music? How about working at the Red Andrews' dinner or other charity events on both Thanksgiving and Christmas? How about reading the Bible?

I'm not much for all the hyped up Christmas services organized religion puts on these days--by the time you add videos and power point and all the decorations it looks like Jesus Disneyland, to quote my youngest son Derrick.

I don't think Jesus would be comfortable there...in fact, he probably wouldn't be welcome. He'd probably be attending a church or synagogue in a poor black or Hispanic part of town rather than the fancy carpeted brick and glass temples to selfishness common in rich white areas. His words about rendering to Caesar and to God separately wouldn't be welcome in these fundamentalist churches where they combine right wing politics with a supposed Gospel. He wasn't much for organized religion. Read the Sermon on the Mount (Matt 5-7) and tell me where you find that in today's churches and Christmas season?

And he'd not be happy with me for being so judgmental, would he?

I think he might also attend a Black Friday stampede and reenact his rampage with the money changers in the Temple. In 2,000 years, nothing much has changed has it?

Rather than being irritated by all this of the season that isn't, I just need to go listen to "Silent Night." And start working on this year's Christmas cards.