My last surviving uncle, Michael Henry Clark--after whom I have my middle name, lives in Santa Fe, as I've told you. 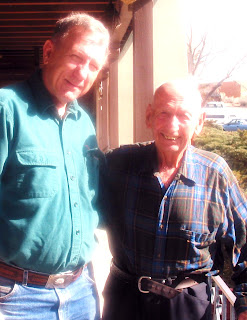 Mike is 87 now, and while his sea legs are failing, he's in good health. Here's something I wrote just a couple of  years ago...


He stood at the iron railing on the balcony of his apartment, the morning sun in his eyes, facing the dark blue-green .
He looked like a sailor on the bridge of a ship, watching the rolling blue green ocean in front of him.
“I think I’ve got my sea legs back,” he called, as I waved goodbye to my favorite uncle.
Between him and the mountains sprawled the US National Cemetery and then the city of . In a few years he’ll be buried in that cemetery for American veterans.
For now, he can see it every day, and hear taps playing at as it caresses the white gravestones marking in perfect rank order over the green hills.
Petty Officer Second Class Michael Henry Clark  served on a sub chaser in World War II and on a LST in , including the Inchon Landing.
Fourth son of dirt poor parents in the Oklahoma Depression, Mike fled the state, lied about his age to get a job in , joined the Navy, and saw the world.
After the World War he earned two degrees and then survived combat in . He came to to visit us when I was still a kid and I gave him the mumps. He taught high school English, spent the summers in teaching himself Spanish.
Then he landed jobs with the US Information Service teaching English in , , , , .
He came back to and taught in the Indian Arts Institute for 20 years, teaching real Americans from tribes all over the country. Today, he is welcome in many pueblo homes on feast days.
In his apartment, a short-wave radio links him with the rest of the world, its antenna stretch across the ceiling and out the door and balcony. He spends the winter months listening to broadcasts from , from , from the .
Still traveling the world, he stands at the bridge of his ship in , looking over the cemetery to and the mountains beyond.
He never lost his sea legs…never will.
An American veteran.
Many like him are buried in that National cemetery, and in others around the country.
On Memorial Day, I’ll think about my Uncle Mike. Who will you remember when you see the flags at half mast? 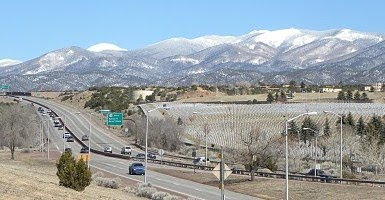 The white headstones of the National Cemetery in Santa Fe, with the Sangre de Cristos in the background and the Taos highway in front. 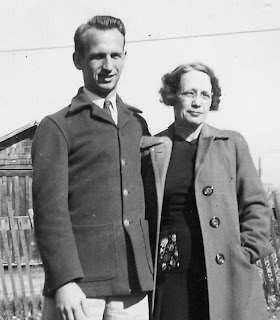 My uncle Mike and my grandmother Cuba John Miller Clark Reasor many years ago.