The mystery of the two cemeteries, solved 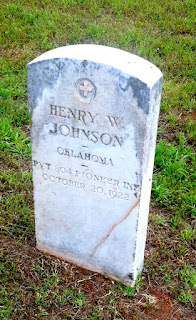 Henry W. Johnson fought for his country, serving in the Pioneer Infantry in WWI. I saw several of these terms, and started wondering about this cemetery at Seward Road and Broadway. I came home, and looked it up. Pioneer Infantry was segregated, all-black infantry. Then I looked up Seward, Oklahoma, which is where the road got its name. It was a small community near the railroad tracks a mile west of the cemetery. There's still a Baptist Church there. The clues added up. Did you guess?
It is a "colored" cemetery as it was first called, and Seward was their community, or as we would say today, Black or African-American. Henry Johnson wasn't permitted to be buried across the road with the other vets. First cue to me was the poorer conditions of the graves, and then I saw two newer graves, with photos of two black women attached.
Today, WWII and Vietnam veterans are buried there also, but now by choice, and probably pride. 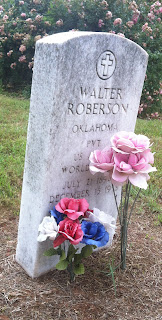 These graves are decorated just like the others. Isn't it strange that we think we're too good to be buried next to someone else? Our skeletons are the same, and once the flesh is gone, you can't tell the difference. Just as you can't by looking at a tombstone. I will post other veterans' photos later, and you'll not be able to tell which cemetery they are in.
Only one question remained, rather than assume segregation. Was the other cemetery white? So I called the Pollard Funeral Home in Guthrie and got Charles Pollard, who has been burying people in the cemeteries for 35 years.
Yes, he told me, the other one was white. And the large number of veterans is a result of the Seward Cemetery being one of the few in the area until Guthrie added another one fairly recently. The farm boys and area residents who went off to war, found this a natural choice.
Then at the back of the poorer cemetery, I found this grave, the ultimate in mortality's lesson for us all. 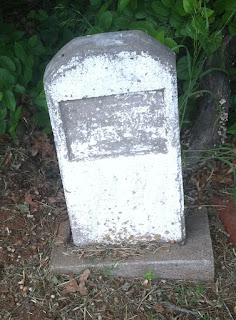