Aboard at the White Pass summit 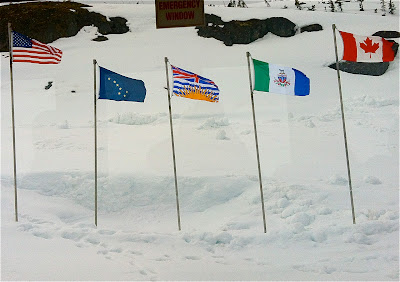 Three thousand feet up, at the White Pass summit, you reach the Canadian border. Deep snow greets you, along  with five flags, U.S. Alaska, British Columbia, Yukon Territory and Canada, virtually where the borders meet.
You don't need a passport unless you're on the train going to Whitehorse in Canada. The train cars go on a siding, the locomotive unhooks, slides by and attaches to the other end for the trip back down to Skagway. Shoulda brought a coffee thermos, but the sky has cleared and it's bright, almost glaring. I know why it's called "White Pass." 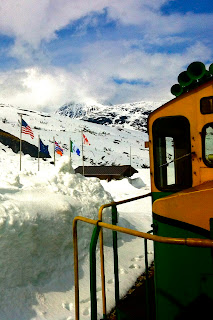 There's time to look and chat, but you don't get off the train. Then since you were in the car closest to the locomotive, you're at the end of the train, which means a great view back down the line. The seat backs are flopped forward-reversed, and you switch sides with the people on the other side so they can have the same views you had coming up...left, looking down, way down, through two tunnels, across a trestle with a 1,000 foot drop, with the ocean and Skagway shining in the distance.