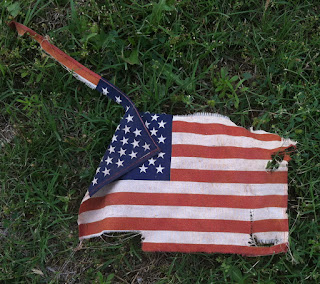 I came across this tattered flag in a rural cemetery today, a cemetery filled with veteran's graves. It was one of those Saturdays to spend meandering through the country.
North of Edmond in Logan County I came to Seward Road, and there were two graveyards, one on the northeast corner "Seward Cemetery" and one on the southwest corner, "Seward Memorial 1897." They're old, and I stopped at the northeast one because I could see some old gravestones. 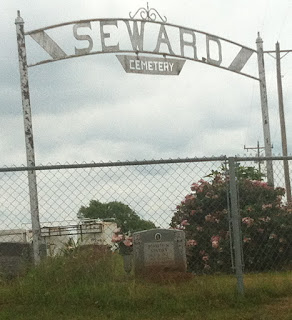 It wasn't until I visited the one catty-corner from it that I discovered a mystery, a mystery answered by calling a Guthrie funeral home, and doing a little research on the computer when I got home. 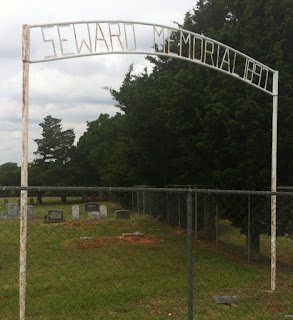 Can you guess? We've zoomed past Seward Road hundreds of times on I-35 a few miles east of here, never thinking about how the road got its name. Most folks who turn off it, go east to the Lazy-E Arena, I suspect. I had driven north on the backroads, eventually  ending up on what is Broadway, but north of Waterloo road. It was cloudy and a morose kind of day for me, and the cemeteries were just there waiting for me. Solving the mystery was the best reward, after wandering around, taking photos of veterans and other graves, wondering about the stories.
Before I tell you about the mystery, the other mystery was why there were so many veterans graves in the first one. It's out in the country, but there were more than 20 veterans graves there, starting with veterans of the Civil War and Mexican War. 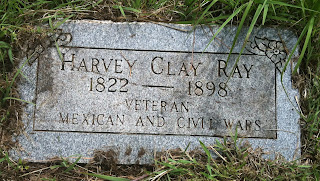 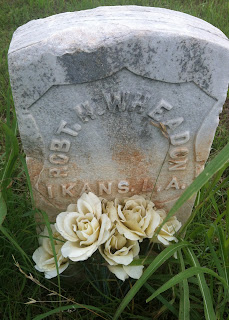 The oldest veterans' grave I found belonged to this man, buried in 1898. Most of the graves of the Civil War veterans you have no idea when they lived or died, because they're identified just by their units. Twentieth Century graves identify people by what service they were in. Civil War graves list their states and units--and here were graves from Missouri, Kansas, Illinois and Indiana infantries. They're also distinctive, with their whitish gray marble and slightly rounded tops. I think it is remarkable that people still decorate these old graves. How American.
This cemetery also has newer graves, including veterans of WWI, WWII, Korea and Vietnam. Here's the most recent I found. 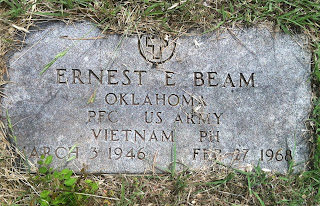 One footnote before we return to the mystery. I found this grave, of someone who would be my age, but he  never made it. His name must be on the Vietnam Wall in Washington. Can you imagine the heartbreak of parents and loved ones? Why do I visit, why am I interested in cemeteries and veterans graves? I guess it is mortality, and history, but there's more. I hoped to find a Confederate's grave...they are scattered throughout Oklahoma, but I didn't here. Still, there are so many stories to tell.
Now, back to the mystery of the two cemeteries.  I'll post more veterans graves photos later.