I don't usually read short stories, unless they're by Ray Bradbury, but when Jeanetta Calhoun Mish of Mongrel Empire Press mongrelempire.org sends me a book  by an Oklahoma author to possibly review, I take it as an invitation to explore, at least gingerly. 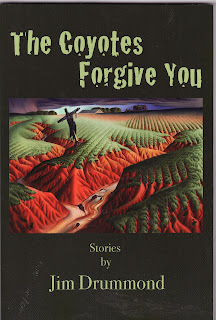 I opened "The Coyotes Forgive You" by Jim Drummond, a Norman lawyer --15 stories in 144 pages--captured by the haunting and disturbing cover reproduction of "The Crucified Land" from the Gilcrease in Tulsa, which oozes Dust Bowl Oklahoma.

Inside, I found a haunting and disturbing selection of  adventures into the minds and geography of Oklahomans. Drummond's bio says he and his wife's home "would confirm they prefer eccentricity in all creatures."

His stories reflect that peculiar eccentricity of individualistic Okies. Remember when you sometimes have trouble going to sleep because your mind keeps jumping from one random, undrelated thought to another? You'll be intrigued by Drummond's storytelling as it jumps from character to character, setting to setting, making you wonder,  what's next?

My favorites were "The Battle of the Washita" and "Nolan in the Badger Cafe." The Washita story comes from an 11-year-old boy telling of growing up near Devil's Den and Tishomingo in a failing marriage. A drinking father, an adulterous mother, and hard living. Divorce from a child's viewpoint.

I am fascinated by Drummond's imagery as well, bringing truth and philosophy into his writing. The child is a painter: "When truth flows out of you in paint and pencil strokes ... . Truth holds no images, does not last, because it needs to be liquid at the moment of truth." Wow!

I love small town cafes. the food, the characters, the conversation. You've heard the conversations in the Badger Cafe before, perhaps seasoned with the Tabasco sauce near Okmulgee. Drummond is a master at telling stories with a Hemingwayesque conversation between us ordinary, eccentric Okies.

More geography... the story "Personal," about someone answering a personal ad in "The Gazette," and driving to near Guthrie's Masonic Temple for a meeting. Others mention okra, mountain oysters and Studebakers. How could I not wonder, what's next?

Samples of  Drummond's description and imagery. From "Walnut "Eyes": "The blackboard of my memory didn't come with erasers." From "Woodhawks": "They seemed happy to carry the whole load of the acquaintance and the conversation, like a fat man on a teeter totter."

If you want to know where the title of the book comes from, you'll have to read the third story, "Confessor," told by a non-Catholic, about a visit to a priest in Madill.

As a reader, you might be discomfited by Drummond's portrayal of ordinary people, but they undoubtedly come from his imagination and earlier life as a tank driver, sale barn drover and "murderer of mesquite trees." His boots and stories are covered with the eroded red clay portrayed in "The Crucified Land."