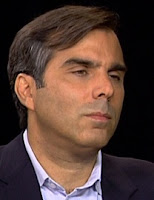 Michael Slackman, the deputy foreign editor of the New York Times, was on our campus this week, part of the American Democracy Project, one of the great programs at UCO.

The Bronx native lived in Berlin and Moscow, and then Cairo for eight years before returning home this past year, and he spoke to our students and then an evening crowd. The ADP is a national effort at more than 250 public universities to build civic engagement in young people, and the Times is an essential partner. As a result, we have The Times on campus for students five days a week, and we get to bring journalists in about once a year to speak.

Slackman's visit with political science and journalism students were conversational. His evening speech to a crowd of more than 200 on the Arab Spring prompted a lot of thought on my part. You can read more about the speech from this article in The Oklahoman, written by a former student of mine, Vallery Brown.
http://newsok.com/arab-spring-issues-discussed-at-university-of-central-oklahoma-event/article/3667625

Democracy and tribes
Most of all, Slackman is a storyteller, and his speech was full of anecdotes about individual people in the Arab world, showing how the "Arab Spring" a year ago had affected them.

I thought many of his comments had parallels here in this country. Quote: "I learned more about democracy in the Middle East, than growing up in the Bronx."

"In authoritarian states, people are not citizens, they're subjects. They become tribal for protection."

"If you ask them who they are, they answer  by their religion, then Arab, then nationality. It's their tribal identity first. "

"Police states have two speeds--patience and violence. To survive in a police state, you have to go along."

The need for dignity
"You can't underestimate how much people want dignity. What set the revolutions  into action were people who acted because they'd lost their dignity." It started with a Tunisian man who had lost everything because of the government and set himself on fire. Slackman said, referring to Syria and other areas, "The area's still burning."

Subjection of women
He said the way to understand what happened was the treatment of two groups--Christians and women. Female genital mutilation is common--90 percent are "circumcised" and the men consider this a way of controlling them.
Christian standoff
He said Christians make up about 10 percent of Egypt's population and the mistrust between them and Muslims  was kept in check by a "social contract" between the dictator and the Catholic church. When that broke down with violence against churches, the Christians had nothing to lose.

"For 18 days, all of them put aside their tribal identities and became one people. The most remarkable thing was I saw Christians protecting Muslims praying. But after it was over, in a country with no rule of law, they reverted to their tribal identity," he said.
What makes democracy
I was most taken by his comments on democracy.
"Democracy isn't voting. Voting is the result. Democracy is values--the values of diversity, the tolerance of that diversity and the willingness to compromise, without which nothing happens."
He praised UCO and the ADP for working to improve  America, for linking the press and democracy, telling a story of meeting with American military. "We both protect democracy, but in different ways. Our job is to help inform the electorate."

A favorite quote: "In the sweep of history, individual decisions are just as consequential as the big events. That's what the Arab Spring was, individual people making history."

Another note on diversity and tolerance. "Islam is not terrorism." He said in spite of anger at the US for its support of Israel and invading Iraq, he was always treated courteously in the Mideast, because people understand that governments and individuals are separate. He added that even if people didn't  like their governments, they didn't necessarily want a revolution.

"Revolutions take a long time to work out. One Iranian told me, 'Revolutions are the east part. What you build after that is the fundamental issue."