People with grit
Seventy-seven years ago was "Black Sunday" when the worst dust storm of the Dust Bowl devastated the Oklahoma Panhandle and adjoining states. http://www.srh.noaa.gov/oun/?n=blacksunday
Burns, producer of the Civil War series, National Parks, and other documentaries, is on a promotional tour, and OETA http://www.oeta.tv/ and the Oklahoma Historical Society    http://www.okhistory.org/  teamed up to bring him here.  We watched five segments of the four-hour-long program which will air in Nov ember on OETA , and it brought tears and pride and stunned astonishment.You can see some clips of the film on his website: http://www.pbs.org/kenburns/
We got to go thanks to former student Ashley Barcum who is communications director for OETA. There was a huge crowd, including politicos.
It was typical Burns' excellence. He and his team interviewed hundreds of people and did extensive research. Some of the photos and videos had not been published before. But it's not dry history, it's part of the emotion that makes Oklahoma what it is.  Burns and his crew went to Guymon today--leaving at 5 a.m., to show the clips and give copies of entire interviews with many of the people who were in the film. He sadly noted that four of those have already passed on.
More astounding was the fact that people in the audience knew the people in the film. One woman was from Hardesty and lived through it with her neighbors. Another said, "That's my mother." The stories kept rolling, and Burns quipped that he felt like the story wasn't done yet. Here's a clip of some of his comments.
Listening to Burns talk made me want to get out my notepad and take notes. OETA newsman and friend Dick Pryor had a 45 minute interview with him that will air in November also. Dick said Ken almost talks in poetry.
Here is one comment that stood out: "Memory is not past tense. It's present tense. So is history." If you doubted that, it wouldn't last. Someone asked to see the hands of the people in the crowd of about 200 who had been through the dust bowl and knew someone who did...Most of the hands in the room went up.
Seeing this work makes you proud to be an Okie. This was all the more real to me since I recently returned from Black Mesa, Boise City--heart of the dust Bowl and prominent in the film--and Guymon. 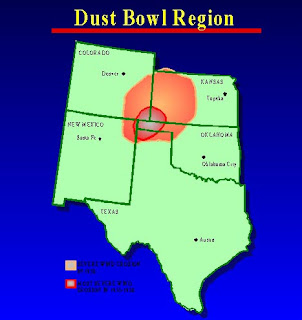 The Oklahoma Historical Society says Associated Press staff writer Robert Geiger coined the phrase "dust bowl" in an article the day after the April 14th storm.  He and photographer Harry G. Eisenhard were overtaken by the storm six miles from Boise City, and were forced to wait two hours before returning to town. He wrote an article that appeared in the Lubbock Evening Journal the next day, which began: “Residents of the southwestern dust bowl marked up another black duster today…” Another article, published the next day, included the following: “Three little words… rule life in the dust bowl of the continent – ‘if it rains’.”
Much of that area is still almost desolate, and sparsely populated. The people who live there have real "grit," and not the kind that they survived in the Dust Bowl. Here are a couple of shots I took when passing through, in addition to those windmills I've been painting.
At the end of the presentation, History Center head honcho Dr. Bob Blackburn presented a Woody Guthrie poster to Burns. Guthrie is in the film. It's appropriate that Guthrie, whose 100th birthday Oklahoma is celebrating this year, wrote about Black Sunday:
“A dust storm hit, an’ it hit like thunder;
It dusted us over, an’ it covered us under;
Blocked out the traffic and blocked out the sun,
Straight for home all the people did run,
Singin’:
So long, it’s been good to know yuh;
So long, it’s been good to know yuh;
So long, it’s been good to know yuh.
This dusty old dust is a-getting’ my home,
And I got to be driftin’ along.”


Before the presentation, a volunteer, Theresa Black, entertained the crowd with her guitar and singing, including this Guthrie song.