The email address and subject line grabbed my attention as I scanned the usual barrage of soon-to-be-deleted daily stuff.
"Researching 1930s artists," and "cccstories@gmail.com."
The message from "out of the blue" brought back ghosts, and new information about my Dad, and his brother Louis from those hard times of the Depression in Oklahoma and Texas.
The sender, Kathleen Duxbury, explained she was doing research in the National Archives on a special group of artists assigned to the Civilian Conservation Corps to make a pictorial record of the work.
"I have come across information etc. regarding a young artist by the name of Terrence M. Clark who was age 22 and in his third year of college (art) in April 1936." she wrote.
"It seems a Terrence M. Clark of Lufkin, Texas was once approved (October 11, 1935) for a CCC artist position but declined because he was attending school. In 1936 he was in Norman Oklahoma and made a second application but was declined, by the Army, because he had an amputated right foot."
Somehow she'd come across my blog about Dad having a wooden leg, and wondered if this was my father. http://clarkcoffee.blogspot.com/2011/06/normal-o-microsoftinternetexplorer4.html 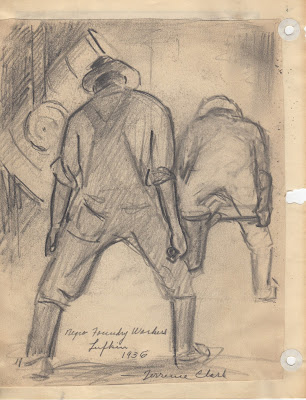 Because of a notebook full of my Dad's old drawings, I knew he had been in both art school at OU, he never finished, and in Lufkin. His drawings usually mentioned dates and locations as he traveled around the country, his wooden leg not slowing his peripatetic life style. But I never knew he'd applied for the CCC. It's too bad he didn't get the job, because he could draw the human form  and portraits quickly and accurately, as you can see.
I also knew that his younger brother Louis worked in the CCC helping build that old highway over the Arbuckles in southern Oklahoma, (I've seen an old group photo) but didn't know he'd gone to Lufkin too. I contacted Louis' first wife Lily on facebook, and today she wrote back that she had a letter Louis had written to his mother with return address "Texas District CCC, Lufkin, dated 9 December 1934." Ah, stories not known and questions not answered.
I wrote Ms. Duxbury asking for information on sending me those documents, and she obliged--four letters from 1935 and 1935 that fill in a few pages of my Dad's life. 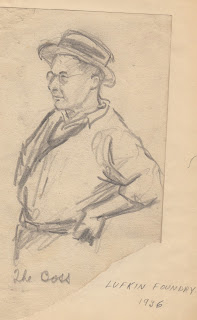 Ms. Duxbury's father worked for the CCC and going through his papers incited her interest into what must be a lifelong work now, recording the impact of the CCC on millions of lives in 48 states, then and now. She says she just has to find the "who, what,when and where" of those stories. Talk about a natural link with this old journalist/blogger.
Her sophisticated website just overflows with stories and information. Be sure and click on it and read away... you'll also find ghosts and stories. www.newdealstories.com
What's remarkable to me is that she does this with her own funds, and asks for donations for the material she gathers. She didn't ask me, but I'll certainly send a check.
She mentions  that her research leads off on tangents. I'm glad she took the tangent on the artists.