Flags of historic friends--Canada and the UK

Of the number of readers of this blog over the years, Canadians and the Brits rank in the top 10. It's good to have friends, even when familiarity leads to jokes about the other, on both sides of the border and "The Pond." Of course there are differences and sometimes tensions, but like loved ones, you tolerate each other, forgive and know how important friendship is.
The flags of Canada and the United Kingdom are among the most recognizable to most Americans, because of so much shared history and culture.

The Canadian flag is relatively new, only officially adopted on Feb. 15, 1965 to replace the British Union Flag. That date is now the National Flag of Canada Day. It's also know as the Maple Leaf flag, and in bi-lingual Canada, the I'Unifolli', "the one-leafed," in French.

"The Union Jack" of the United Kingdom, composed of England, Scotland, Wales and Northern Ireland is deeply a part of American history too. It's the flag of  our "Mother Country, of many of our ancestors, and the flag we fought against, and then alongside, over the centuries. 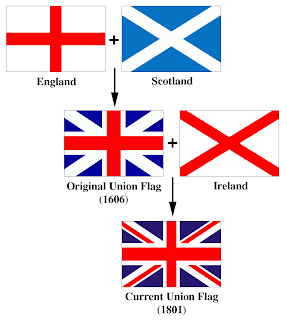