Inspiration and energy by free spriit in #clarkclass

The joys of this job are the students, present and past, and my current students in twitter for media today were energized and inspired by a former student, Heide Brandes, @HeideWrite.
Heide is a free spirit who lives life to the fullest. She's succeeded as a community journalist and a PR professional, and now as a freelance writer and professional belly dancer.
Her talks with the class are off the wall, like her, wide open where everything can be discussed, and so full of practical advice about life and living, in addition to her careers.
When I asked the class general impressions before we began our debriefing, one female student just said, "Wow."
For the record, Heide is the student who appeared in an ad with me promoting UCO. Yes, she's also a belly dancer and owns a belly dancing school. Energy personified, in her very early 40s.
Here, recorded by current student student Alyssa Ramsey @alyssaramsey13, a photography major are my students' debriefing impressions of Heide. 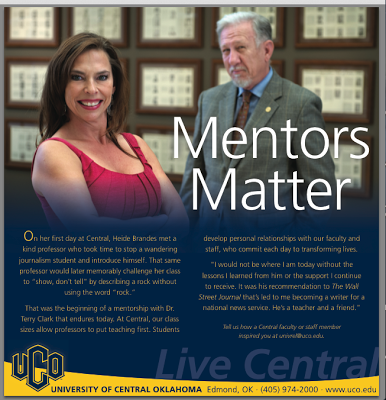 Here's the newspaper ad we appeared in together, thanks to her talking to my administration.