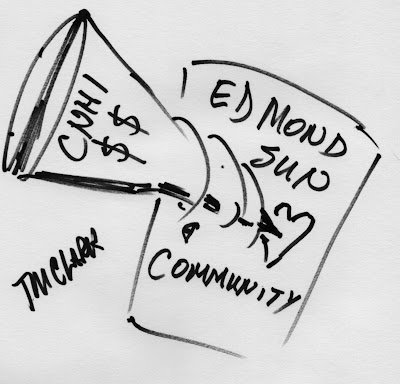 This is my fifth editorial on the execution of The Edmond Sun
This week, the recently executed Edmond Sun won four first place awards in the annual Oklahoma Press Association Better Newspaper Contest.
It won first place in news coverage, in community leadership, in advertising and sales promotions categories in its daily newspaper circulation division.
This tells you much about the greed behind corporate parent cnhi's contempt for Edmond as a community and for excellent in journalism. And it magnifies again what the loss of The Sun means to Edmond. The community is weaker in many ways.
Consider the awards. Best in news and community leadership. The execution leaves a huge vacuum in the city...less news coverage, less community leadership. A major force in holding the community together, in giving the community a voice, in keeping our citizens involved in all kinds of information has been erased.
And merchants and citizens, consider the irony, or hypocrisy,  of killing The Edmond Sun for lack of an unrealistic profit margin when it excelled in advertising and sales promotions.
Bitter icing on the cake, and a mere salve of condolences to the hard-working, dedicated  staff who were summarily "furloughed."
Congratulations to each of them. They deserved better. The Sun deserved better. Edmond deserved better.
cnhi won't win any awards for community leadership, that's for sure.
++
Below is former editor Mark Codner's remarks on the awards, and a photograph of his now vacant desk, a metaphor for the vacuum in Edmond. 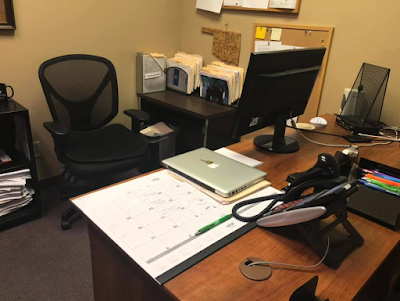 Many of you know I was the editor of The Edmond Sun as CNHI shuttered the facility and “merged” with The Norman Transcript. Because I’ve been placed on furlough I have been careful in saying anything publicly; however, before the Sun was closed down we had entered the annual Oklahoma Press Association awards competition. They were announced earlier today. I am proud to say the Sun took first place in 4 of the 8 categories, and placed second overall in our division. We were first in News, Advertising, Sales Promotion, and Community Leadership. I would like you to consider what truly defines a great community newspaper? How about “News, Advertising, Sales Promotions, and Community Leadership?” I’m very proud of the team of journalists and advertising specialists we had at the Sun. At the same time I can’t remember a time when I’ve been more sad! Thank you to my co-workers at the Sun for the time we had together and thank you to my hometown of Edmond.