An hour in my life as an American, voting


6:40--When I parked the car across the street from the Edmond church of Christ this morning, I couldn’t see the end of the line of voters wrapped around the building.

But in contrast to the early voting crowds last week, there were still cars pulling into the parking lots, no traffic jams on the streets, and people walking to the rear of the building.

I took a last sip of coffee, got my mask, my cap, my notepad and pen, and started walking. 48 degrees, sun not up yet. I leave my coffee…don’t want to have to “drain my radiator” as Mom would say, not knowing how long this wait would be.
6:45—As I got to the rear of the church I could see the end of the line before it reached the church school playground. There are two precincts that vote here. 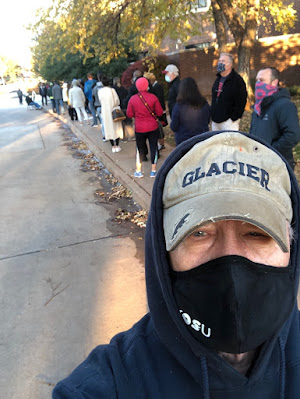 6:46--I start scribbling in my notebook and taking a few photos.
6:54—There are now about 20 people in line behind me, cars and people still arriving.
Almost all voters are maintaining five to six feet apart, most are wearing masks of every style, except a few close friends or family chatting away. Some are sipping coffee, looking at phones, a few with chairs. Coats, sweatshirts, caps. There has been no harassment or signs of intimidation. After all, Oklahoma, and most of Edmond, is “safe” in the national election.
6:59—Line behind me is now around the playground and out of sight behind me. Cars still arriving, but still plenty of parking.

7:00 –Sunrise, and the line is moving! About 10 feet at a time, in batches. Chatting with the guy in front of me, sharing stories of early voting taking four or five hours. He like me drove by last week and kept going. We discuss only two early voting places for the entire OKC metro being inadequate. 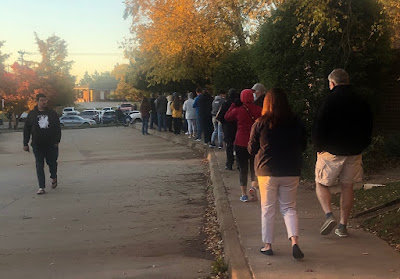 “It’s supposed to be easy to vote,” he said. “Yep. Americans will vote, regardless,” I said.
“Do the math,” he said. Me too…fewer people in two precincts, faster lines. Nicer weather. No mention of politics anywhere that I can hear.
7:08—Sun hitting the tops of the trees, beautiful orange and yellow foliage not damaged by the ice storm glow in morning light.
7:12—Line round first corner, heading south, moving well. 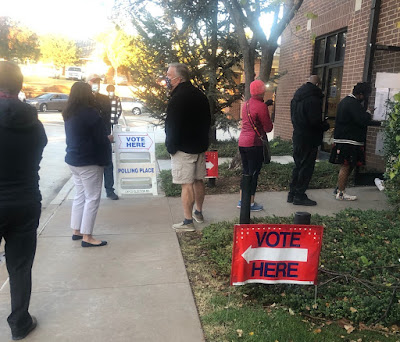 7:18—Around front of church, heading west toward entrance. Can see “Vote Here” signs ahead.
7:25—Inside the church. Four lines, two for each precinct. People standing six feet apart.
“Where do you live?” someone asks in the other line. “Chimney Hill, two of us reply. He replies, “Me too. “Great to meet neighbors we’ve never met.” “Great neighborhood, we agree. We chat briefly about the ice storm, tree damage, Halloween being difference, cleanup.

“These poll workers are going to be exhausted by the end of the day,” we agree. 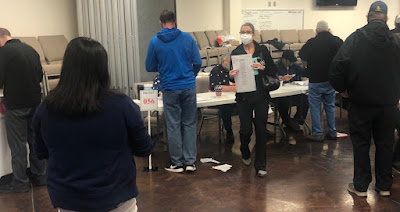 7:31—To front of line. I show my ID, learn that Democrats and Republicans are all on the same list. “The way it should be,” I say to the poll worker, and thank him.
I get a ballot, a sanitized pen, and go to the booth to vote. Then I walk to the computer doodad that takes the ballot, slip it in. Drop off my pen. 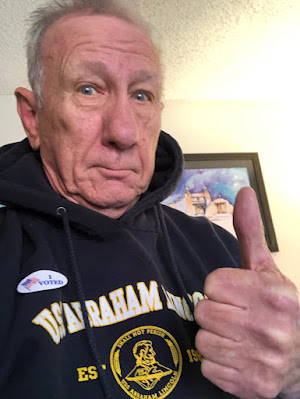 7:33—I’m number 84.
7:34. I’m out the door, just ahead of the guy I visited with earlier. We introduce ourselves and part. I fill out an anonymous exit poll, deposit it and head for the car. One veteran is standing across the street, holding an American flag. My coffee is still hot.
So thankful for those poll workers, and American freedom.
8:45—Home. Susan can’t believe it, says, ”Wow.”
I’m charged. Voting makes you feel good. Now to transcribe my notes. 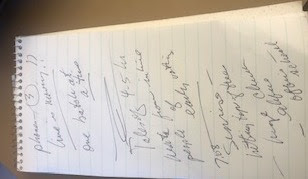