Nine years ago, memories and missing


"Quartermaster Clark. Shipmate," said the white clad sailor as he concluded and presented a folded flag  nine years ago. Another sailor played taps. 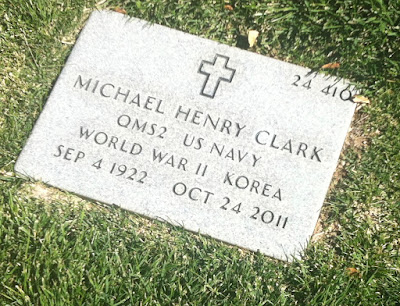 A few minutes earlier at the Santa Fe National Cemetery,  I had given the eulogy for my favorite uncle, Michael Henry Clark, WWII and Korean War U.S. Navy combat veteran.

I've written about him and this many times as the years go by, and the memories pile up. I have a photograph of him teaching me, then a first grader, how to kick a football in Fort Worth. He was headed Korea.

Now I miss most the late night stories in his apartment where he lived for years, across the Taos highway from the cemetery. Every night you could hear taps played at 9 p.m. And I miss the laughter and too much Cuba Libre as the night went wore on. I still have one of those glasses sitting on a shelf.

A photo of he and Susan and I sits on my desk. I may need a Cuba Libre tonight.

A Sailor's Final Port of Call