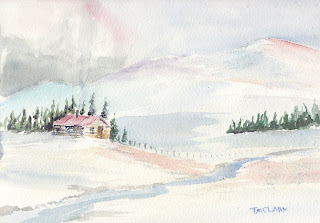 My cabin is in my imagination, my dreams, my memories.

When I grew up in New Mexico, Mom and Dad built a 12 x 20 concrete block cabin in the Manzano mountains southeast of Albuquerque. It had no running water, and a heavy wood door on one side and a huge picture window on the north side so Dad could have "North light" for his painting. Outside was a rain barrel that gathered runoff from the roof for washing dishes. We had to haul drinking water. We also had a stack of firewood.

We'd go up there and camp when friends were building it for us. It was a sanctuary almost an hour from where we lived, most of the trip on a mountain highway winding through the foothills of the Sandias and Manzanos.

As with anything, the cabin had its good and bad points. As kids, my brother Jerry and I were free to roam on the weekends, through the woods, hiking, exploring, being free, sleeping out under the stars. Fun around a campfire. But the cabin was confining too...instead of exploring all the wonderful places in New Mexico that were so close to us, we usually went to the cabin on weekends.

There were some happy stories and some tragic ones too, but for kids, we were usually unaware.

Many years later, on a solitary camping trip to New Mexico, I decided to find the place, to see if it was still up. I drove down familiar roads, and up mountain roads, and almost didn't find it. There are lots of homes and cabins in that area now. It took a full afternoon before the tires of my car crunched down a forested dirt road, and I knew I'd discovered it.

Somebody else had built a home on the lots, and the old concrete block walls were out behind it. I drove up the driveway, met the owner, and told him briefly about it, asking if I could look. He agreed. The roof and door was gone, and only the metal frame of the picture window remained. I remembered the cabin as big...but through an adult's eyes, it was really small. Big enough for a double bed, a wood burning, potbellied stove, a table, some chairs, a place to put a Coleman stove, pots and pans, and artwork and mementoes lining the wall. The new owner was using it as a storage area.

I didn't tell him about the "time capsule" I put in the corner stone so many years ago--a mason jar with favorite things in it, screwed tightly shut, and dropped in the hollow of that block when the cabin was being built, sealed with concrete. I can't remember what's in it. Today, I wonder if the cabin is still there, and if it's not, did someone discover a little boy's mason jar and wonder about the stories in it.

After my visit, I wrote a short story about the cabin, and a traveler trying to find himself. I've probably lost the short story now. I still dream about finding that cabin from time to time.

Cabins are still with me. Several of my watercolors have them as focal points of interests in western landscapes, usually with mountains behind them. I never much thought about that until recently. Why? Where? Probably because I love the west and solitude, and also know a cabin would be a great place to hole up with lots of wood, good food and wine, lots of books, writing and painting materials, a loved one...no phones, no email, no TV, but lots of birds and wildlife, beautiful vistas, and quiet.

I know people complain about "cabin fever" when they're shut up too long in a big city and can't get outside.

I understand that. I have a different kind of cabin fever.

That's what's brewing in my old coffee pot, perking away on a potbellied stove, the smell of woodsmoke in the air, snow falling outside the window, some good stew simmering on the stove, warm kerosene lantern light, a cozy bed with lots of blankets, good books, stories, laughter.