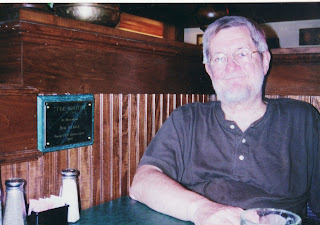 Bob, and the plaque, in The Booth, copies given to all UCO journalism faculty and staff by The Sweet Pea.

Sketch of The Illidge , both photo and sketch by The Brunette

The Clark forgot to tell the story of "Himself." The Illidge would often jibe The Clark after forays in The Booth, by telling The Queen Bee something like, "Well, ask Himself how yesterday's score was. did Himself smell a skunk?"

The Clark just thought this was an Illidge idiom. He was wrong.

In November of 2008 he was in Chicago, and spent an afternoon at The Chicago Institute of Art.

Strolling down one hall, The Clark noticed on a far wall two medium-sized oil portraits of a man and woman, and he recognized the style. "That's got to be Robert Henri," he thought. Henri is a favorite of his, especially for his book "The Art Spirit."

So he walked across the gallery to get a closer look. Yes, he was right, and he took satisfaction in recognizing a painter's style.

And then he stopped, stunned.

He read on, with wet eyes, learning that those terms were old Irish expressions of the highest devotion for friends and family.

The Clark was very quiet walking back to his hotel.