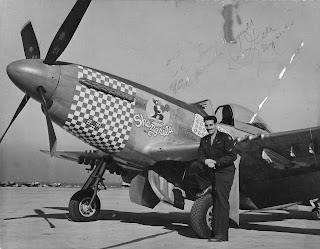 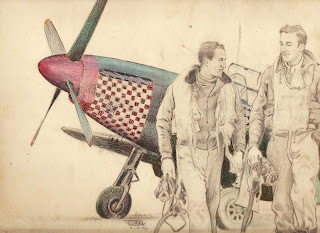 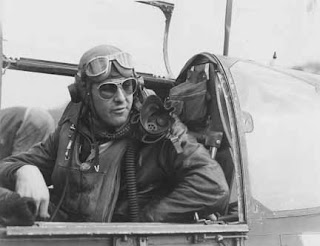 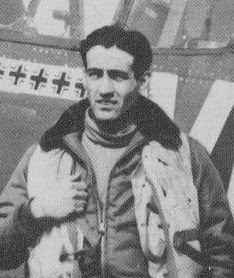 Two of the top aces of WWII were "Don and John," who had more kills together than any other pair of pilots. Both were in their very early 20s,--younger than most of my students today-- coming in out of high school to join the RAF,  in Spitfires before joining the U.S. Army Air Corps. Don Gentile and John Godfrey met in the U.S. Eighth Air Force, 336th Fighter Squadron, 4th Fighter Group in Europe. Godfrey had 18 kills, was shot down in 1944, probably by accident by his wingman, bellylanded, and spent the rest of the war as a POW. He died of Lou Gehrig's disease in 1958.

After the war Don Gentile stayed with the Air Force: as a test pilot at Wright Field, as a Training Officer in the Fighter Gunnery Program, and as a student officer at the Air Tactical School. In 1951, he made his last flight, crashing a T-33 trainer which killed both Gentile and his passenger. His decorations include the Distinguished Service Cross, the Silver Star, the Distinguished Flying Cross, the Air Medal, the Presidential Unit Citation, the World War Two Victory Medal, the American Campaign Medal, the British Distinguished Flying Cross, the British Star, the Eagle Squadron Crest, and other foreign medals. These are the kind of young men who keep us free.

My dad worked for Consolidated Aircraft(the B-24 Liberator) and North American Aircraft (the P-51) in Fort Worth during the war, and fell in love with the P-51 Mustang. During and after the war he drew sketches of the duo in combat, and then in 1946, he did this sketch of them coming back from combat. Three months later, Don sent him this inscribed photo.

It's no wonder that WWII aircraft are important to me, and to my Air Force son Vance.