The Sangre de Cristos ahead, as I-25 winds past the Pecos exit, and prehistoric Pecos pueblo ruins and ancient Pecos mission. This is the view the Missouri traders on the Santa Fe Trail saw as they prepared to camp, after two months crossing the prairies from St. Joseph,  for the last night before the next 20 miles around the southern tip of the mountains, through Apache Canyon, and down the slopes to the Mexican town of Santa Fe. The Mexican authorities had built a road from Pecos into Santa Fe. Out of view to the left is Glorieta mesa, and the tracks of the Santa Fe Railroad--which never actually enters Santa Fe. 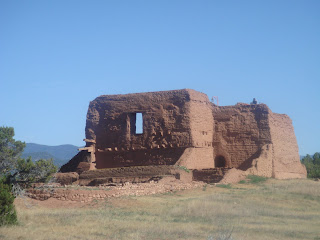 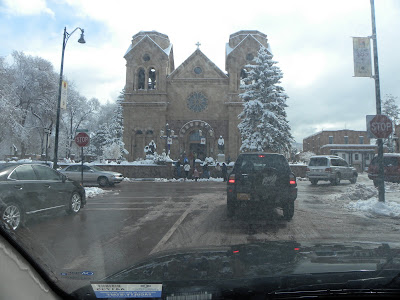 On the morning after storm, The Cathedral Basilica of Saint Frances,the patron saint of Santa Fe, built by Archbishop Lamy in the 1800s. His story is the subject of Willa Cather's "Death Comes for the Archbishop." It is just up San Francisco street, one block from the Plaza, the end ofhte Santa Fe Trail, with the Palace of the Governors on the north side, the oldest seat of government in the united states, founded 6110. 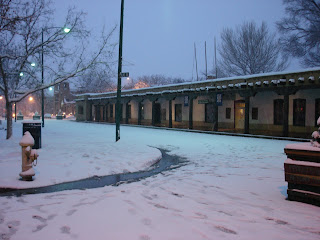 The  Palace of the Governors 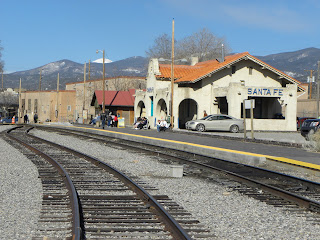 The Santa Fe Depot...local service only to the main line at Lamy. Just south of here is the new depot for the daily commuter trains from Albuquerque, a brilliant project of mass transit, called The Rail Runner. The build the line strait up the median of I-25, to help all those government workers who can't afford to life in Santa Fe and commute daily from Albuquerque 60 miles south. Gracias, Gov. Bill Richardson. Note in the background you can see snow-capped Santa Fe Baldy. Keep reading. 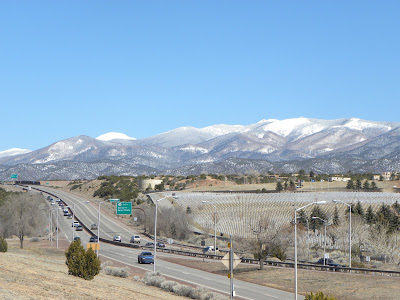 On the west side of the mountains, heading north from Santa Fe to Espanola and Taos, past the National Cemetery and its rows of white veterans' graves. Look closely and you can see the ski lift towers at the top of the peak at left center. The white dome in the distance is Santa Fe Baldy. View from near my uncle's apartment--the day before the storm.

Santa Fe Baldy, elevation 12,600+ feet, at sunset, turning red to earn the name as part of the Sangre De Cristos.