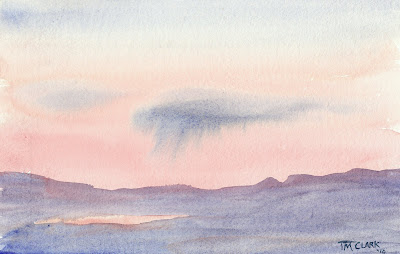 Watercolor--7" x 9"
300# Fabriano artistico paper
The beginning of March, the passing of February. The pages of February included this, "Every now and then something that appeared to be dead comes gradually  to life. Often it dies again."--Poet Laureat Donald Hall, in Unpacking the Boxes. More than the sun, every day I realize this. This painting came when I thought of the sun, and New Mexico writer John Nichols--Milagro Bean Field War, and his stunning photographs of the mesa near Taos and writing in The Sky's The Limit, an environmental book, of which I have a fist edition..
The pages of March look  to the future and the past....What happened to present tense?

Paul Theroux in Ghost Train to the Eastern Star, trying to retrace his steps from 33 years ago in the Great Railway Bazaar, and George Friedman, a futurist in The Next 100 Years. Theroux discovers ghosts, as we all do when we retrace steps, even journeying into the present. He does what I'd like to...travel on trains and write. Friedman melds 20th Century History with geopolitics and fascinating possibilities. Good reading, even with ghosts.