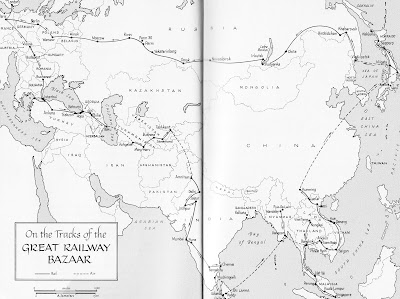 The map of Paul Theroux's travels on ghost trains...if you can't go there yourself, the book is the next best thing for freeing the spirit after a long winter, or even just being cooped up by life.

Reading Paul Theroux's Ghost Train to the Eastern star, on the tracks of his Great Railway Bazaar from 33 years ago, from England across the continent and back on the trans-Siberian Railway.

As a fellow traveler in time at least, here are some things I've underlined so far:

"And there are dreams, the dream of a foreign land that I enjoy at home, staring east into space at imagined temples, crodwed bazaars....

"Being invisible--the usual condition of the older traveler--is much more useful than being obvious. You see more, you are ignored. Such a traveled isn't in a hurry, which is why you might mistake him for a bum.

"Hating schedules, depending on chance encounters...
"Ghosts have all the time in the world...
"It is almsot impossible to return to an early scene in your traveling life and not feel like a specter."

"Improvising my trip, rubbing against the world...."

"Memory is a ghost train too."

"Travel also holds the magical possiblity of reinvention; that you might find a place you love, to begin a new life and never go home."

"The decision to return to any early scene in your life is dangerous but irresitbile...In most cases it is like meeting an old lover years later and hardly recognizing the object of desire...."

"Writers sometimes have to leave home."

"Nothing is more suitable to a significant departure than bad weather."  "...writing weather."