October, and now what?

Visiting with metal artist and Paseo gallery owner, "A Jeweler's Art," and friend Sheridan Conrad yesterday about October and change and art, and we both came up with a question, "Now What?"

I was down in Paseo at Adelante Gallery trying to paint en plein air between taking down some watercolors of my month long show and rearranging the rest of the display. There's  something glorious about sitting on the front porch on a cool October day, chatting with a few people coming by, trying to paint.

Frankly I was stuck...it's been a while since I painted, and longer since I wrote other than journalism. I don't like the term writers' block. I think it's just a rut, or a lack of motivation, or distractions. But I decided I had to go back to the place I was this summer where there was a painting a day, even if a poor one.

So I got started on a sketch of a tree on the other side of the street, twisted and interesting like old people.  I slipped into the old habit of spending too much time trying to realistically draw it, and not enough getting my feelings into it.

Plein aire in watercolor is more difficult than oil because dry temperatures, wind and sun can dry the water quickly and interfere with intentions. The other problem with watercolor is that it "dries down," and is not as brilliant was you though when applying the paint.

But I tried anyway, and began to experiment  with wet paper and a multicolored background over the drawing of the tree.  Then I had to let it dry and that's when I walked up to talk to Sheridan and those questions came up.

I think October makes you ask questions like that. Sheridan took me down the block to the three galleries, including gallery owner Linda Hiller,  forming "Paseo Creek Galleries" (on the east side of the street) --one a photo gallery, another a collection of several artists, and one a contemporary gallery.

By the time I got back to my painting about 30 or so more minutes later, it dawned on me how great it was not to be on a schedule. I picked up my brushes and finished the tree.

Today as I was looking at it, I consider it too bland and restricted, though I stopped by Sheridan's on the way home and showed it to her, and she said, "You've got the feeling of it." I thanked her for inspiration.

But today I'm looking at it and find myself not particularly satisfied. Otherwise, "Now what?" First, a little explanation. It is only about 8" by 10," on some handmade India paper that doesn't have a true white. It is earthy, but the varied colors I used, did indeed dry down. But still, it's a painting.

So today, I painted another one, being much looser and faster. It's smaller, only about 8" by 8" I suppose. I used more vibrant colors, and it helped, but what really helped was just painting "from the hip," rather than trying so hard. Frankly, neither one of them look much like the tree at Paseo, but they're paintings, not photos.

What I like about Paseo is the non-traditional--the open aire, the free expression in many forms, and the inspiration that comes from associating with creative people.

So, "What now?" I don't know next life stage, next area of endeavor, next day or even next article, or paiting. But I have painting, and today written. Maybe that's the treasure of "Now What?" 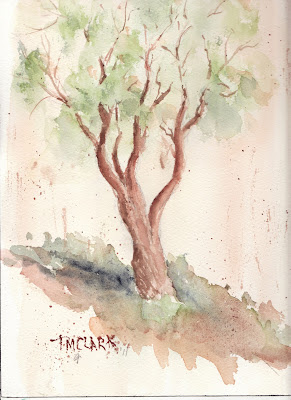