I first saw the DeHavilland Beaver float planes in Alaska, taxiing up to the wharf in Juneau, unloading and loading passengers and taking off again, past the crowded cruise ships to view the glaciers. I didn't get the chance to do that, but our ride in the little Cherokee into Skagway whetted my appetite. So when we visited Seattle a week ago, and I saw rides in float planes available off of Lake Union, I just had to do it, taking off and landing on water.
Here's what it's like, about 1,000 feet up, a little over 100 knots airspeed,, including a video of the landing.  The airline, Kenmore Air, owns several of the classic Beavers--with radial engines, and Otters, with turbine engines, and provides air service up into the San Juan Islands and  other remote places in Washington State and Canada. It has its own magazine, Harbors, and terminals at Lake Union in north seattle and at Bowing field in south Seattle, plus shuttles to Seatac airport. What a life. http://clarkcoffee.blogspot.com/2012/06/flight-of-fancyto-skagway.html 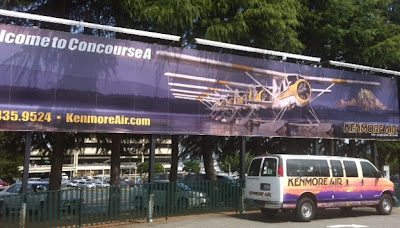