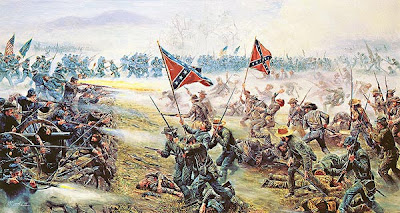 Barefoot and brave beyond measure, they stepped out of the trees into open fields of knee-high corn, forming ranks a mile long, a mile away from the enemy crouched behind a stonewall at the top of a ridge.
Fifteen thousand men, in butternut and gray, an army that had never tasted defeat, blood red battle flags raised high in the humid July afternoon. 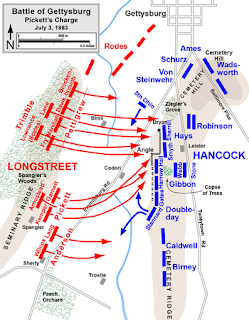 A mile away, the blue-clad foe, battered by a two-hour long artillery barrage, gasped in amazement at the sight below them. The Army of Northern Virginia, advancing on the Army of the Potomac—the two best armies in the world. Gettysburg, Pennsylvania.
An hour and a half later, 10,000 Americans were dead and wounded. July 3, 1863.
We give grand names to what happened: The High Water Mark, Pickett’s Charge, the Turning Point, America’s greatest battle. But there’s nothing grand about the carnage. About 51,000 Americans were killed, wounded or missing in three days, July 1-3. My eyes glisten as I think about all those men dying for their differing beliefs.
Pickett’s charge, which was also Pettigrew’s and Trimble’s charge, followed two days of terrible fighting with the outcome of the battle was still in doubt. Then General Robert E. Lee made the mistake. Confident in his seasoned veterans, he ordered the frontal assault.
Have you been there? I have, and seen the monuments and the graveyard, and walked the fields.  I don’t understand the courage of men marching to certain death, ironically toward “Cemetery” Ridge where the Federals waited. They walked into murderous artillery fire that obscured the field with smoke and dust. Point-blank artillery and rifle fire cut them to pieces. By the time they got within 25 paces of the stonewall they didn’t have the force to crack the Union line. They crossed the wall, but couldn’t hold. Two Pennsylvania units, suffering almost 50 percent casualties, met the charge and held.
You’ve heard of the “Charge of the Light Brigade,” but that unit in another war lost 37 percent of its men. Paltry compared to American losses—on both sides—at Gettysburg and throughout the war. A Minnesota regiment lost 82 percent; a Pennsylvania unit, 75 percent. 23 Federal regiments lost more than 50 percent of their men.
Three North Carolina Units were wiped out—100 percent. The 26th North Carolina had only 70 men left out of 895. The Carolinians lost one of every four people killed in the entire battle-- more than 20,000. Virginians? Sixty-seven percent of Pickett’s command of 5,500 men was gone. The others in the charge lost from 52 to 62 percent.
In three days, Lee lost 28,000 men, more than a third of his army. Twenty of his best commanders were gone. The losses there were not unusual for the War…disease from wounds killed an alarming number. In four years of war, The Union lost 360,000 men—110,000 battle deaths and the rest to disease. The Confederacy, 94,000 in battle and 164,000 to disease. More losses for Americans than in all other wars combined.
After Gettysburg, Lee’s army never won again, never went on the offensive again, although the war lasted another two terrible years before the killing stopped. At Appomattox, he had only 26,000 troops left.
Bravery beyond measure on both sides. Buford and Chamberlain saving the first two days for the Union, setting the stage of The Charge—raised from obscurity by the book “The Killer Angels” and the resulting movie “Gettysburg.” How can you not watch and cry?
No wonder the South didn’t celebrate the Fourth of July for many years. Gettysburg, and the fall of Vicksburg a day later spelled a defeat and horror that lingered long.
Lincoln said it best, four months after the battle, dedicating the cemetery:

“…the brave men, living and dead, who struggled here….the world… can never forget what they did here….”

In spite of my Southern heritage, even though I automatically say “we” when speaking the Confederacy because my non-slave-owning ancestors wore gray, I believe the outcome from those bloody but heroic fields was best for this country. We grow freedom from defeats.
The red stripes on our flag are the blood of those who died at the Alamo, in the Bataan Death March, at Wake Island, at the Battle of the Bulge, at the Marine retreat at Chosin Reservoir, in Tet and at Khe Sanh, and in a thousand places…and at a place called Gettysburg.
As you celebrate your Independence this July Fourth, remember those thousands who died so bravely there 149 years ago.