"What was the most astounding thing you saw today," asked my wife Susan, about my drive into eastern Oklahoma County on July 4. I started to say nothing really...I'd gone to take photos of flags and a wooden caboose, and just to hunt. I came back with some photos, but nothing really remarkable, except time to myself to think and look. 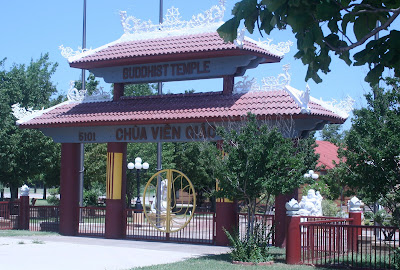 But then it hit me. I was driving south on Sooner Road and turned west the wrong way on 36th Street. I went over the Canadian River bridge and came to something unexpected...a Buddhist temple. I drove by determined to turn around and take a photo, and at the corner, not a quarter mile from the temple was a Baptist church in Forest Park. 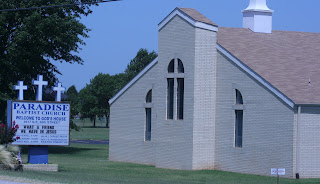 I thought... this symbolizes  what July 4 is all about... not a "Christian" nation, but a nation where people of all or no faiths can be welcome. People who are independent, and are free to follow their beliefs. Then I drove south to 23rd Street , through Spencer and Choctaw and east until I'd come to Harrah, giving up on finding anything else.

And there, getting ready to turn around, I saw the second most remarkable thing of the day in front of me. At the Harrah postoffice, Old Glory waves, but right under it was the POW MIA flag. It always attracts me, but you don't see many in this state...usually on homes of Vietnam vets who've lost buddies long ago. In New Mexico you see them everywhere, including over your head as you walk out of the Albuquerque airport. But here, in Harrah, some patriots have given the flag official designation.
Independence Day!