111 countries, and a record July

Panama became the 111th country to have had a reader click on this blog, and total number of hits for the month of July is reaching a record, well over 4,300. Earlier in the month two other new country-clickers were Uruguay and Togo. 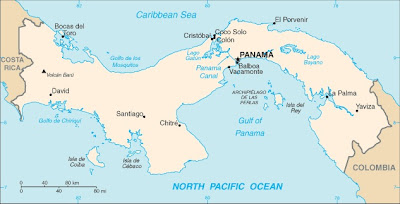 Panama has a long history intertwined with the U.S. It was originally colonized by Spain, after Balboa crossed the isthmus to be the first European to see, and  name the Pacific Ocean, in 1513. It gained independence in 1821 and was part of Colombia until 1903.
That's when the U.S., wanting to build the Panama Canal, managed to get it to secede from Colombia. The 48-mile canal was completed in 1914 by the US Army Corps of Engineers, and remained under American control until 1999. That happened because of a 1977 agreement, and there's an Oklahoma connection. Senator Henry Bellmon was one of those backers and he was criticized heavily in his home state and  on the editorial pages of The Oklahoman. I remember seeing a billboard saying "Benedict Bellmon."
But American intervention has also been tawdry. The country was largely democratic until the military took over in 1968, and the US and CIA supported it, including a military strongman, Manuel Noriega, tho took over in 1983, even though he was involved in drug deals and assassinations.
President Reagan  supported him, using secret funds to back Contra rebels in Nicaragua. Congress learned of it, and blocked the funds, but Reagan and his CIA subordinate Marine Oliver North used secret money from arms sales to Iran to work with Noriega and illegally keep the funds going. It's called the Iran-Contra affair. Eventually though Reagan invoked sanctions on Noriega, and President Bush(the first), invaded in late 1989 to capture him, based on threats to Americans, drug charges, and protecting the canal. Noriega was captured in five days, and was in prison until 2007. He was extradited to France on murder charges and sentenced to seven years in 2010. But the French released him to Panama, to serve 30 years in prison.  Oliver North now works for Fox news.

Since then, the country has had four successful democratic exchanges of power. The country is economically strong. A 2012 poll found that its capital Panama City has the happiest people in the world. Revenue from the canal is a huge portion of the country's income.
Its flag, dating from independence, has two stars and four squares, representing the different political parties. The blue is traditional for the conservative views, and the red for the liberal. America has it backwards, referring to blue and red states. Until that division in very recent years, calling someone in America a "Red," amounted to calling them a Communist.