"And later we learned that the island was called Malta.And the people who lived there showed us great kindness, and they made a fire and called us all to warm ourselves..."--Acts 28:1-2 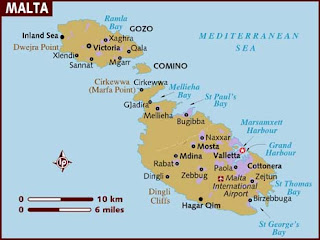 Every time I think this blog has reached about all the countries it's going to, a new reader in a new country clicks in. So it was this week, when the stats, show a reader from Malta, the strategic island in the Mediterranean, south of Italy and Sicily, the 112th country on this blog list.
Most people probably know of this island republic because of the account in Acts where St. Paul is shipwrecked there, or because of the famed Knights of Malta, or the 1941 movie starring Humphrey Bogart, "The Maltese Falcon."
Beware when your country is small and strategically important. Every major political power wants to control you. That's the history of Malta, which didn't gain its independence until 1964 from Britain, becoming a republic in 1974.
So I don't know who among  the more than 400,000 residents clicked on this blog, but thanks, and you live in a beautiful place with a long history and rich heritage.
Its name may go back to the Greeks, "Myelitis," a derivative of "honey-sweet," which may have referred to the honey there. The Phoenicians, Romans, Arabs, Normans, Hapsburgs, Spain, French,  others, and British have ruled the islands, 50 miles south of Sicily and 207 miles north of Libya. In the 1530s the islands were given to the Knights Hospitaller, a military religious order now known as the Maltese Knights, driven  out of Rhoades by the Ottoman Empire. Their rule ended with Napoleon. Today's Maltese Euro carries the Maltese cross.
It has long been an important naval and air station in wars and peace. Paul, a prisoner bound for trial in Rome, was shipwrecked there in about 60 A.D., according to Luke. Malta was one of the first Roman colonies to convert to Christianity. There is today a St. Paul's Bay on the northeast shore of the main island.

It's a very civilized country, with the second highest voter turnout in the world since 1960. --the highest for countries without mandatory voting. The official languages are Maltese and English, and the largest minority is retired British. Though relatively small, it has the largest number of car registrations per capital of anyplace in Europe. The country has both public and private health care, and it is ranked fifth in the world for health systems by the World Health Organization (America is 37th).

The red and white flag carries the Cross of King George from 1942. An alternative flag is red and carries the cross of the Knights of Malta.
What a neat place in the world. Check out the country's site for photos and more great information.