The 24th UCO autumn of change 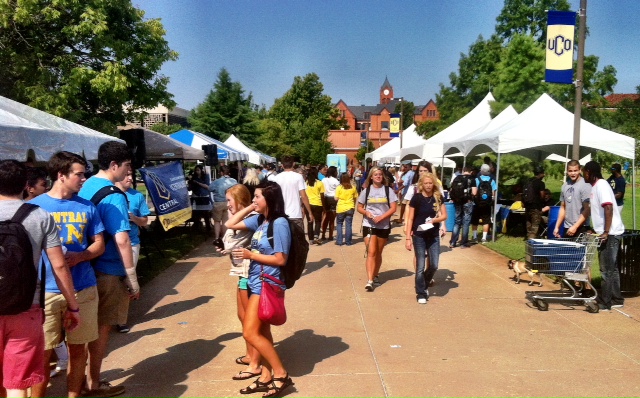 So much has changed.
It's my 24th autumn at UCO.  Parking lots are crammed and students crowd the sidewalks, visiting and  heading to and from classes.
Most of these students weren't even alive when I started work here, and the freshmen were born in 1995.
Venturing across campus, listening to music blaring, letting the energy of hope and youth sink in, I'm amazed at the changes.
The students all have mobile phones, iPods and most have laptop computers, non-existent when I started. They nonchalantly carry backpacks and water bottles with them. There are many more now, about 17,000, and there are many more languages spoken on campus as international students have also increased.
They walk on neat sidewalks across a manicured campus where gravel parking lots once lapped up to buildings.  In 1990, there was little Internet, email was new and strange, and there were only a few computers on campus.

Media has changed. The student newspaper, The Vista was in its prime, and broadcast was in another department. Today they've merged and are dominated by online news, using new inventions never imagined then--Facebook Twitter, Instagram and You Tube.
Since then Oklahoma survived a terrorist bombing and has been revitalized. America has been attacked and involved in three wars and air travel is excruciating.
My office today is in part of a building that didn't exist then, along with other new buildings dotting the campus. We're still a commuter campus, but there more resident students and a vital campus life, almost non-existent then. The average age of the students has dropped from upper twenties to lower twenties, as more and more fresh high school graduates arrive.
Then I was old enough to be my students' father...now I could be their grandfather. I've worked under four university presidents, four deans, four governors and four U.S. Presidents. I've endured countless meetings, just as more than 3,000 students have endured me.
The first classes I taught were editing and feature writing. Today I teach classes in social media, blogging, international media and writing. My teaching has changed as I grow more tolerant and aware of what's important and not so. I served 19 years as a department chair, had successes and losses, and wish I'd given it up long before then.

Teaching keeps you young, and aware that you're not--Clark
I've changed too, with less hair, more wrinkles and weight, though I still work with newspapers. I have written and traveled more. My children are up and grown.  I've survived some trials, tragedies and losses, and enjoyed adventures and happiness, losing friends and loved ones, and making new ones, including being blessed with many great students. And of course, eight grandchildren.
But some things haven't changed at UCO, including the energy of the young, especially at the start of the fall semester. Old North, the 1892 iconic building  is still vacant but being renovated, towering over the campus. And the coeds are always attractive.