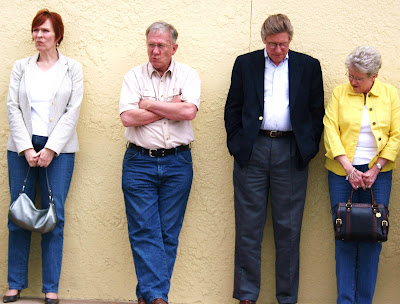 "The Execution"
Dr. Roz Miller, Dr. Terry Clark, Dr. Mark Hanebutt, Dr. Sherry Sump
I call this photo "The execution," taken a year ago outside Alvarado's Mexican Restaurant in Edmond. The Mass Communication Department had just bought me lunch, to celebrate the end of my 19 years as chair, and we were lining up for a group photo. Four of us were lined up waiting for the others, and my speech colleagues have taught me to look at the "non-verbal" communications. Well, the non-verbals speak loudly here, about people and their thoughts. I have no idea what I was thinking about, and I imagine new chair Roz is wondering what she's getting into, but thanks to Susan Clark for this candid shot.

Three office moves and other adjustments later, I'm having fun not having to evaluate professors or deal with student problems or attending time-wasting meetings or filling out unending forms. But I'm not prepared for the adjustment of losing my right arm, when Sherry Sump leaves next week.

Three of us were interviewing applicants for the secretary's job at the Journalism Department at UCO. As chair I could have made the decision myself, but I asked two faculty members, Sherri Massey and Bob Illidge, to interview with me. I respected their judgment and experience and wanted their help because it was such an important job for a growing, student-oriented department.

I looked at the schedule, and, for the first time of many in all the years since, found that Sherry Sump was correct.

She was the second applicant of the day. Right before her, a hot young 20-something had all the right answers and I was lusting before she walked out the door.
After Sherry's interview, the decision was unanimous. Bob Illidge, with 30 plus years experience in the advertising business, was adamant. "We need her experience," he said. Sherri Massey, turned off by hotsy-totsy, agreed. If we'd hired the young thing, we'd have had an office full of male students and faculty gathering like flies as she preened.

Sherry Sump had been an executive secretary for Exxon in Houston. She had a bachelor's degree from Brigham Young. She and her husband Gary had just moved here, where he worked for an oil company. She was precise and professional. And she wasn't afraid to correct me.

In my 19 years as chair of the department, Sherry Sump is the most important person I've ever hired, and my best hire.

We soon found out that she had a sense of humor to go with her efficient organizational skills. She endeared herself to the faculty because she treated us all equally. In fact, that became her trademark--a magnetism of sincere interest in people. She knew all the names of the physical plant staff, those hard-working people who keep any organization alive, yet who are often overlooked or ignored especially in the sometimes pompous, basically insecure world of professors so concerned about their status. As a result, when the department needed something done, we often got preferential treatment. Painters and custodians and everyone else were always welcome to come in on a cold day for coffee, or a piece of candy, or a donut. Hers was a first-name relationship with the staff.

Students always found a mother who would listen and try to help, with patience and a smile. As word of her retirement spread, more and more tributes came in from graduates, about how she helped them survive the red tape of the campus, whether it be enrollment or scheduling or something else.  Other secretaries came to rely on her for advice, and soon, she was one of the "Seven Dwarves," the liberal arts department secretaries. Of course, she was "Grumpy," and she enjoyed the humor.

To the chagrin of some academics on campus, we began calling her "Dr. Sump," thanks to Bob Illidge's dry humor. I almost bought her a desk name plate with that on it. To those who would protest, we'd say she did "hold a doctorate." Every night. Her husband Gary has a Ph.D. in Engineering, and she holds him every night.

She always spoke her mind, which to me was an asset, though some  on campus didn't agree because of her impatience with micromanagement or inane policies or incompetence or unfair pay in administration. Such honesty is often not appreciated by the politically correct, glacially-moving world of higher ed. In the Journalism Department, we loved it.

Not that she and I wouldn't fuss, especially the longer we worked together and became a team. We understood each other. She was always respectful, calling me, "Doctor Clark." She always asked for time off ahead of time. She always followed procedures. She was a meticulous bookkeeper. I'd ask her for an estimate on budget balances, and she wouldn't give it. She'd look it up and give me the dollars and cents.

But we could joke at each other out of mutual respect, throwing good-natured jibes at each other, typical of what I would call "Newsroom humor." One day we were fussing, rather loudly, and a student came in the office with a concerned look. "Are you two married?" she asked.

We laughed and it stuck, Sherry becoming my "other wife." Susan picked up on it, especially when I'd tell her about talking to Sherry about problems in the department or other everyday events. We could talk about anything, and Susan would ask, "Well, what did your other wife say?"

Bob Illidge and I would get to work early, at least by 7 a.m. and sit there in the darkness of the office in the winter months, drinking coffee, sighing and talking. We agreed...she's the best secretary we've ever known, and Bob especially had worked with many. Many times she'd show up early too, and sit and talk with us. I started calling her "The World's Best Secretary," until we merged departments and Charlotte Waddle became our colleague and that's just not fair to another professional.

But I also called her my right arm, and she still is. Every leader needs people like Sherry Sump around. They become part of you, because leadership is not bossing or micromanaging, but  helping other people to succeed, and knowing when and how to make decisions. To do that you need people to trust, other voices, and you need big ears. Literally,  I have big ears, and I'm a reporter, so I have built-in reliable sources, and I know how to read people and find stuff out. But Sherry has been a key part of those ears. She was not a "snitch," but many times she'd say something like,  "You might check...," or "did you know there's a problem...." Her guidance was always to help people and the department. And as a leader, you need someone with the integrity and self-security to tell you when you're wrong. You don't need a cheerleader or "Yes" person.

I attribute a lot of this to her western upbringing, growing up on the Western Slope of Colorado. Those people tend to be self-sufficient, competent, and working-people oriented. I also told her once that if all I knew about the Mormon religion was Gary and Sherry Sump, I could become a member. They don't have a perfect life, with three children and aging parents, but those problems have helped keep them from being judgmental of others, accepting people for who they are.

About the only drawback to her success was her success, because I couldn't get work done  with all the traffic outside my non-sound-proof door.  She was right outside my office, and she was such a magnet for people to come in and talk to. Students, faculty and staff would all come in, to sit and visit, or bring  problems to, and then the phone would ring. I could hear every word. Shutting the door didn't help, and it was sometimes impossible to get work done. The office of the Journalism Department became a popular destination, thanks to her, and that builds a sense of community and success and professionalism.

Her professionalism extended beyond the department, across the state, as she helped me with the Oklahoma Journalism Hall of Fame. She has been the contact for most media people in the state, and they respect and love her as much as our students and UCO staff. I announced she was retiring June 30 to the 250 people from around the state attending the April Hall of Fame ceremony. Many publishers and others came up and asked," what are you going to do without her?"