It's been ten days since I took the ride of a lifetime in a B-17 WWII bomber, taking off from Wiley Post airport in Bethany, Memorial Day, fittingly on the 66th anniversary of D-Day on June 6. It was my Fathers' Day gift to myself...there are only about 12 of these Flying Fortresses still flying, and this plane is actually one year younger than me. It is a flying museum, and it's taken me this long to put together my thoughts. These are my videos and photos, as an American.

Click on the photos to make them bigger. I suggest you click on my music from the theme for the Memphis Belle for reading this, or on Glenn Miller.

It took $3 million and years to restore it, and they named it after The Liberty Belle which flew 64 missions over Germany in the war and was later scrapped. This one makes tours and is run by volunteers all. Brother -in-law Jim Henry went along for the ride and has as much fun as I did.

Except for strapping in for takeoff and landing, we were free to move around during the flight, and we spent time in the bombadier's seat. I looked through the bomb site and could have hit GOP headquarters. We shot down ME-109s from the waist guns, patted the bombs that were meant for Hitler, listened to the roaring radial engines, stuck our heads out of the open rear canopy into about 140 mile slipsteam.

The big thing gets off the ground slowly and doesn't climb fast at all. We were up to about 1,500 feet and flew out across Overholster, back north over the Kilpatrick Turnpike and over Arcadia and back...about a 30 minute ride.

All the time there was this old gentleman who just stood by the waist gun window, hands on the 50 caliber, looking out into memories. Wish I could get his story. I wonder who and what he saw from years ago.

I have a special affinity for the big bombers. Dad was a draftsman during the war, working in Fort worth for Consolidated aircraft and North American, which produced the B-24 Liberator and the P-51 Mustang. Been around them all my life.

I'm astounded by the bravery of the 18- and 20 year-olds who flew these planes into combat. Nothing between you but a thin metal skin. No pressurization of insulation at 20,000 feet. Flak and fighters trying to shoot you down. Out of more than 14,000 B-17's made, more than 4,000 were shot down. Ten crew members each. If you want to come close to their experience, watch the Movie "The Memphis Belle."

They are many of of the reasons I'm writing this in English, and not German. 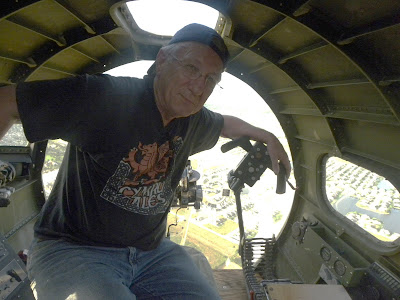 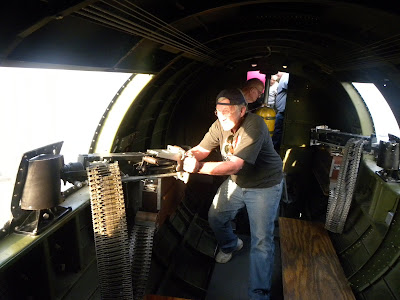 Shooting down Nazi ME109s from the waist 50 caliber. 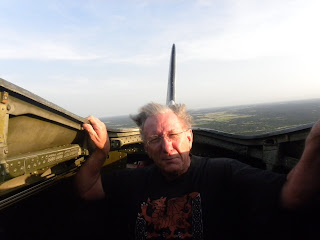 It's breezy up here at 140 mph plus, and the canopy open,
and look at that huge tail in the background. 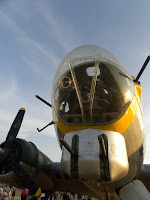 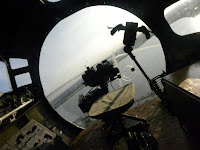 The nose view,inside and out. 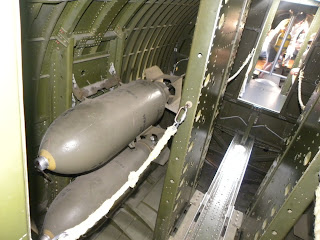 The bomb bay...special delivery for Hitler, looking back from the cockpit and front of plane to the rear where the belly turret, waist gunners, navigator and others were stationed. Yes, you walk along the narrow steel path to get from front to back, and you can see sky through the body where the bomb bay doors open below you. 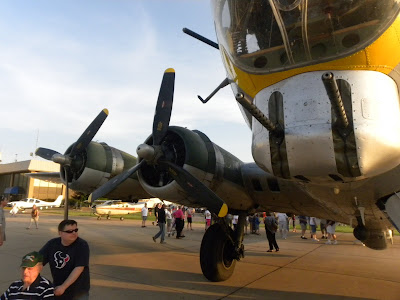 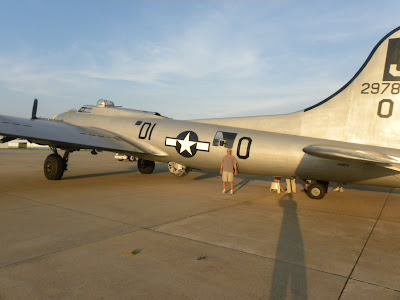 Brother-in-law Jim Henry by the waist gun where we shot down those Nazis! 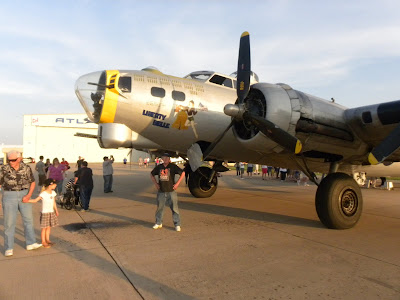 Me in front of the business end of the lady, where we bombed the GOP and Nazis!

At the end of the day, portrait of a lady and a fighter.


This was the wonderful sound and motion of those wonderful engines, over Lake Arcadia. I wish I could do this for a living, full time.


And to remind us, that in spite of boyish excitement of the day, this really matters. July 4 is coming up. It's not just a three day weekend.