More photos from long ago on visiting Houston, thanks to  my young, mouthy redheaded cousin,who corrects me that it was her father's camera, and ...oh well, she's bossy too.

I don't know all these folks, but we're East Texas-related. Back row, second from left, is Aunt Gladys Lutrick.  third from left is my mouthy redheaded cousin Sarah Beth. Next to her is the baby of the family, uncle E.T. Culp, and in front of him is Louise, wife of Charles Rogers Lutrick, the oldest cousin, who must have taken this photo. Next is Aunt Ima Gee. Then there is Clark Lutrick, father of Sarah Beth and Charles. Next = is Sophie Elizabeth Beard Culp, our grandmother.Next is Tommy Culp, LaMerle Culp, wife of E, T., and mother to cousins David and Lindy. At right is a rare photo of J.C. "Son," or "Addy" (because he had his adenoids taken out). He was the tragic member of the family, dying young. His son Tommy follows in his father's footsteps. I think he was my Mom's favorite, other than Sissie. Mom is at right, holding somebody's baby.
Second row, from left, is me, with arms around Jerry. Then we get to Son's girls, one of whom died young, and the Gee girls, sitting. Carolyn on the right, in front of Brenda. At left with hands on his hips is David Culp and Charles, Lindy" is messing with a camera--they're children of E.T. and LaMerle. Aunt Sissie is in the middle, sitting down.  I think this is one of the very few photos where the four sisters and two brothers are together. 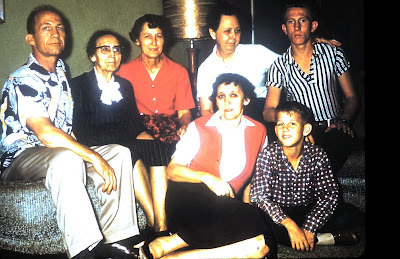 Dad, grandmother, Mom, sissie (adoring me), Me. in front, Gladys, Jerry.
Moving to New Mexico from Fort Worth separated us from our kinfolk, so we got to see them in the summers, on vacations, but not every year. Early childhood bonding with some last to this day. We have photos of some of us as babies sitting on a blanket in the yards from long ago. But we didn't really get to know them well. I was particularly close to Carolyn and Jerry to Brenda, and Sarah Beth intimidated us. But we had good times, playing mud patties in the back yards and  going to drive in-s for soft drinks as we got older in those long hot and humid Southern summers that Harper Lee describes so well in To Kill a Mockingbird.   In later years with reunions and email we've reconnected some, marveling how the years have passed. Jerry and I remain in  self-imposed exile from East Texas. I'm the only cousin who lives outside the borders of The Republic, except maybe for a couple in nearby Louisiana. and Jerry is in Lubbock, which is a far cry from East Texas. As he says, Lubbock is an old Indian word for "flat, brown and ugly." But we're all Texans.