I grew up on U.S. 66 in Albuquerque, never much thinking about it.  Central Avenue was our Main Street, descending in a straight line from the mouth of Tijeras Canyon in the Sandias all the way to the Rio Grande and then up the West Mesa.

After emerging from the twisting roads of the canyon near the end of our trips from Oklahoma and Texas, we'd look out over the city below in the miles-wide valley The first thing you'd see, becoming to a kid, was "Covered Wagon Curios," the first of many tourist traps in Albuquerque. It was a huge, fake stucco building made to look like a covered wagon, white rounded top gleaming in the bright sun. I think it was later moved to "Old Town," the original Albuquerque plaza, where more tourist traps stores still flourish.

If you came through the canyon at night, you'd come over a rise, and the glittering lights of the city beckoned. I remember my uncle Mike once saying, "If Coronado had seen this, he'd have known he'd found the cities of gold."

In those days, the outskirts of the city were still a few miles away, but today urban sprawl laps at the edge of the mountains, and I-40 takes the highway traffic, and Central Avenue is fringed with shabby businesses liked decaying "tourist courts" because all new hotels are glued to the Interstate exits. There are pawn shops, strip clubs, mobile home parks and stores. 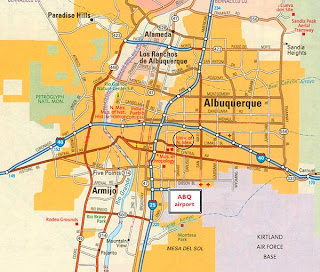 Housing on the south side looks like the typical low rent districts around any military base--Lawton comes to mind--because Sandia Base and Kirtland AFB, and the VA hospital dominate that area. The main difference is that there is precious little grass, lots of gravel in yards, mostly flat-topped stucco homes imitating adobe. I grew up on "The Base," Sandia, and in this area, riding bicycles to grade school on the base, taking school buses and city buses to Woodrow Wilson junior high and Highland High School, which is visible from Central Avenue.

Highland is at the edge of where Central avenue starts to get respectable now. The State Fair Grounds are on the north side , a mile or two north. Highland was the most elite school when I was there (all the base school kids went there--a boon of federal aid to that school). almost everything was college prep, and with so many students (560 in my graduating class--I only ranked about 67th), we were an academic and sports powerhouse. State Football and basketball champions year after year. Six years after I graduated, my brother help set a state relay track record that still stands.

Since then more high schools have been built out on the mesa near the mountains where all the moneyed housing additions are, and Highland is still large, but not the star.

As you keep going downhill from highland on Central Avenue, you approach. the University of New Mexico.

But that's another story....