Forbidden art from long ago

I recently found this collection of my Dad's artwork. But there's more here than a high school student's artist work, probably done in class when he should have been studying. His main topic was WWI., which was fresh in everyone's memory when he was growing up in the 1920s  and early 30s in red dirt Oklahoma.

I learned recently that my dad would not have been able to draw like this in current public schools.   Why? 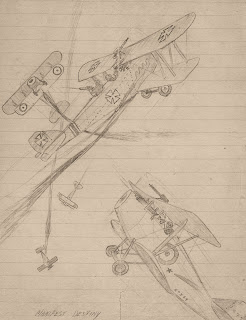 We were recently having a kitchen sink installed, and I was talking to the 30-something fellow doing the work. I expect that he was conservative, perhaps an evangelical, but we were having a great conversation and he had definite, well-defined opinions on lots of stuff. He told me that he and his wife were home-schooling their children. They live in the Putnam City district. He said they sent their son to first grade, and then pulled him out, for a number of reasons. One reason was that the boy was not allowed to draw pictures, in art class, of any weapons. "Boys draw pictures of swords, knights, fighting," he said. "Nothing wrong with that."

I thought of these pictures of my Dad's. I related this story to a professor colleague of mine who also home-schools her children. She wasn't surprised. She said in Edmond, art classes forced the children to "color inside the lines."

My Dad never colored inside the lines. when I was in first grade, I never did either, and got graded down in later grades for wasting my time drawing pictures of U-boats, and dogfights between Mustangs and Me-109s from WWII. Too often, mine showed the Germans winning, and that didn't sit well in the 1950s. 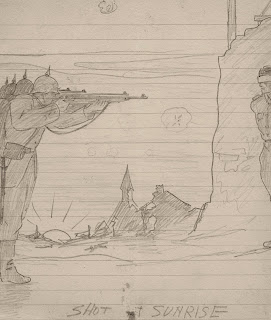 My Dad and I would never have graduated. All my children got good educations in public schools, in Waurika and Stillwater. But creativity was allowed.
And it still should be. Not politically correct test-oriented rote learning. Oklahoma and America need creativity more than ever, and that means letting students explore, and try, and fail, and if they want to draw pictures of people fighting, let them.We don't need cookie cutter; we need individuals.

So these photos, and the ones following, all 8 x 10 on fragile, yellowing paper and Big-Chief tablet paper, are forbidden today. 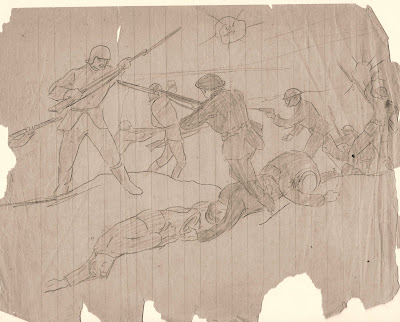