This is the second part of the story I wrote about my trip aboard the USS Abraham Lincoln, which appeared in Edmond Life and Leisure.

The Navy public affairs office on board--of which Lt. Cmdr. Curry is now in charge--readily makes all these facts, and much more, available to the public, as does the ship’s website. It, and the Tiger cruise, is the ultimate in public relations as the Navy does its best to take care of its crew.
His department only hints at the size of this ship. He has about 15 officers and enlisted in his command. It puts out tabloid, full color “Penny Press,” (Just named the best newspaper in the Navy) a daily newsletter, a twice-a-month TV show called “The Boat Show,” and much more, including photography, Facebook http://www.facebook.com/USSLincoln, webpage    http://navysite.de/cvn/cvn72.html and PR ashore. I got to meet these journalists and see them work. Their attitude and professionalism is contagious, as it is all over the ship.
With the airwing gone, I learned the mood of the ship is different, because, well, they wouldn’t say it, but the pilots and rest of the airwing tends to be on a bit of an ego trip.
You catch that when you listen to a Chief describe the nuclear department on board. The two reactors are absolutely safe. You get more radiation from a day on the beach than from them. That was the only place on board we were not allowed, and doors to that area are guarded.
“The Nukes” as they call themselves, are the largest department on ship—from 300 to 400 people operating the reactors, that produce steam from heated water to run the four 75,000-shaft-horsepower steam turbines that power the ship’s engines and electricity.  As the Chief said in his lecture to us on a tour: “The flight deck is just a canopy to keep the reactors dry and in the shade.”
Size dominates again. We went aft to “Shaft Alley” 20 feet below the waterline to see the rapidly revolving shafts coming out of the turbines that drive the four five-bladed 20-foot diameter 45.5 ton screws powering the ship up to more than 30 knots.  The steam comes from the reactors heating water—400,000 gallons a day are scooped up by the ship and desalinated for use.
The Nukes spend most of their time below decks—“We don’t tan very well,” the Chief joked.
There are more such stories…a complete welding shop that can make anything; “Precinct 72”—the brig and its crew run by the law enforcement officer know as “The Sheriff”; the laundry that cleans 5,500 pounds of laundry every day; the barbers giving 250 haircuts a day.
In the fo’c’sle, a bosun’s mate, with an anchor tattooed on his arm, tells of the two 1,082-foot long anchor chains, die cast in 90-foot lengths, and each chain link weighing 385pounds.
Pride shows in an untold story aboard is the art I found on hatches, doors and decks, done by sailors. The Lincoln’s logo, designed by a sailor, is the 1972 Lincoln Head Penny (for CVN 72), with the carrier coming right at you, and the slogan “Shall Not Perish.” Officers have the Lincoln Head on their name tags. Statues and symbols of Lincoln abound on the ship, including the Gettysburg Address.
Sick bay is full of stories, staffed by about 40 people, including a surgeon and four other MDs, a psychiatrist and a physical therapist. There are also dentists. Most common operations aboard, according to the SMO (Senior Medical Officer) who gave us a tour, are vasectomies and circumcisions, although they’ve had appendectomies and more. Most common injuries have to do with injured hands and feet from the hatches and other obstructions. They also deal with a lot of skin and respiratory problems
“This isn’t a cruise ship,” he said.

It’s a warship. You know that as you go up and down steep “ladders” between watertight hatches between decks. The only elevators on board are four for lifting aircraft from the cavernous hangar deck to the flight deck and freight elevators for loading food and more between decks. Bright red fire lockers and equipment are everywhere—remember bombs and jet fuel are stored everywhere. Every room has EEBDs—Emergency Evacuation Breathing Devices).
The hangar deck stretches more than 600 feet long and 200 feet wide three stories below the flight deck. By the time you’ve walked from quarters to the mess area, or to your mustering and duty station, you’ll probably cover at least a mile a day, including climbing the ladders.
Still, there is fitness equipment everywhere. And the admiral aboard, still certified to fly, conducts sessions like “Jump rope for jocks.”
The Lincoln is part of a strike group that includes frigates, destroyers, a missile cruiser and a nuclear sub. It has 10 “sisters” similarly equipped around the world—including the USS Ronald Reagan that was dispatched to Japan. 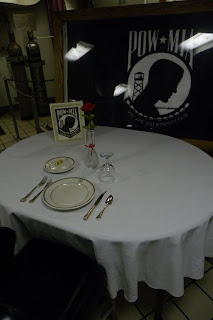 Pride and people. There’s the  lone round table with a white table cloth set up in the mess area. The chair is empty. An empty plate with a slice of lemon and silverware awaits.  There is a vase with a red ribbon and a single rose.  The glass is turned upside down because the guest won’t arrive.  Everything is symbolic. Beside it is the black POW/MIA logo. 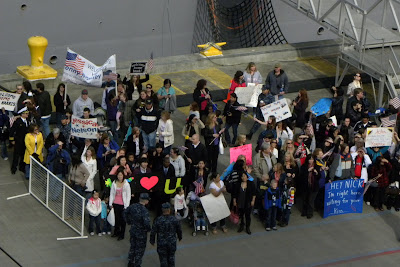 Witnessing the ship coming into home port after being gone six months stays with you emotionally forever. Lining the pier are hundreds of family members, with signs of names and welcoming and hearts for loved ones. The crew, manning the rails around the entire four-and-a-half acre flight deck, stands at attention in their dress blues.
Then as the ship, aided by tug boats dwarfed by its size,  gingerly eases backs toward the pier, the rear mooring line is shot ashore. The crowd cheers and a band plays, “Anchors Away.”
Here comes the crowd, mothers and children pushing baby carriages to await the sailors ready to disembark. It takes an hour to secure the ship, but the first off are the “first dads.” On the Lincoln there were about 30 of them, going down to the pier to see their new children for the first time.
In the 30-minute navigation briefing in the wardroom the night before, the Captain told his officers of the successful trip, but cautioned them to end the voyage of the 97,500-ton warship without a mistake.
“Don’t goon it up and bump the pier,” he said.
The USS Abe Lincoln didn’t bump the pier.


***
·        The best writing on carriers is by Steve Twomey of The Philadelphia Inquirer, “How super are our super carriers?” won the Pulitzer Prize in 1987 about the USS America, the predecessor of the Nimitz carriers. I use it teaching feature writing. For your reading pleasure, check:
·        bit.ly/twomey
·        I asked only one question I couldn’t get an answer for, yet. How many Okies on board?