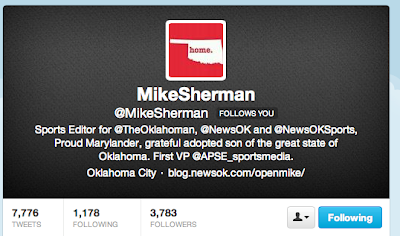 Mike Sherman, @MikeSherman, sports editor for The Oklahoman, was the first speaker for my Twitter for Journalists class.
Mike, a UCO grad, is one of the most upbeat positive people I know, and he grabs my  students', and my, attention with story after story.
There's a quote, an aphorism, in almost every statement, and he's full of practical advice about journalism, sports, jobs, and much more.
He does his homework, and came to class already knowing things about my students because he'd look them up on line.
He told how the sports department uses twitter, from involving readers to write headlines, to staying in touch with readers, to finding story ideas, to looking for employees.

If you want to see some of the things they tweeted while he was speaking --required -- search #clarkclass on twitter, or go to my site, @okieprof, and do the same on #clarkclass. They're immediate and fun. I'll compile and print them later.

His passion and enthusiasm, and broad knowledge of much more than just sports, but the entire social media and journalism world, astounded the students.
After he left,  and at the end of each speaker session, we debrief, and each student comments.
Here are some of the things that the students said stood out:
My  favorite quotes:
My class has become a verb!