"When have you been the  happiest?" is not an easy question to answer on your birthday or any other time. Too many years, miles, people and places. I can't paint weddings, or births of children, or...the list goes on.
But approaching each day without a plan for this month's daily watercolor challenge, to paint "Happy," one image came to mind.
Canoes. Canoeing. I was an amateur canoeist at best, and no longer have the red, 80-pound, 15'8" Old Town Discovery   from a few years ago, but thinking about it, lifted my imagination and memories.
It's difficult to be a canoeist in this country--we have almost no canoe water--clear, fresh flowing streams. Other than family trips decades ago to the Illinois River in eastern Oklahoma, my canoe trips were few, other than out to Lake Arcadia, and down two muddy rivers, the Cimarron from near Crescent to Guthrie, and from El Reno down the North Canadian to Lake Overholser.
But my time trying to learn, to be alone on the water early in the morning at first light, or being lost in nature's time down a river alone or with friends or loved ones, those are times of happiness.
I'm envious of those who are expert at canoeing and do so regularly. I know why. There is only your own effort, and no sound except the dip of the paddle and the slight gurgle of the wake.  Time to think, to solve the problem of the next stroke, to view the wildlife, to think.
One image that stands out is at Arcadia Lake one morning, I was upwind and quietly floated within 100 feet of an osprey sitting in a tree with a fresh catch. Another time, a flight of Canada geese came in low over the brush and landed not far from me. Happiness. 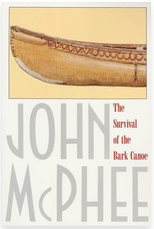 Canoes transport history and craft and philosophy and romance and literature and cultures, one of the most ancient means of transportation in the world. You must read John McPhee's The Survival of the Bark Canoe, about a 150-mile trip in the Maine woods.

My radio column "Coffee with Clark" on KCSC-FM about the geese, from almost 20 years ago:
I could hear them before I saw them. At first I wasn’t sure, but then the sound was unmistakable.
I’d just pulled my canoe out of the lake. The sky was gray with the first cool front of autumn, the sun hidden almost on the horizon. A slight breeze. Quiet.
Then they came in low over the still-green treetops, wings motionless, gliding down in formation toward the water behind the leader.
Maintaining perfect order, they swooped in low over the water, rose, banked, wings moving in unison, voices almost quiet. They skimmed the surface of the water, never missing a beat, not slowing down, until they banked again and had scouted the skeletal old trees full of egrets, the shoreline foliage, the beaver dam, the shallow, almost still water.
After the second pass over the landing area, they curled up in the air, breaking formation. Then they spread their wings wide, putting on their air brakes--you could hear the air and wind rushing against those gray feathers--and they dropped down to smooth landings. The first feet skidded into the water with orderly furrows, settled down into the warm water. The rest of the flock followed.
In a few minutes another flock followed, finding assurance in their companions’ presence.
In less than five minutes the water was full of them, occasionally honking, settling into the shallows for evening feeding and roosting.
I stood there spellbound at the aerial grace, precision, and promise of Canada geese. These early birds are the first harbingers of fall, when leaves turn, the light changes, the breezes rattle brittle leaves and seeds.
Once they were all down, talking to each other, I pulled my canoe up. I wished I’d been on the water in the middle of them, but if I had, they wouldn’t have landed and I would have missed it all. Our lives are richer when we stay out of the way and let the geese have their way. Theirs is the promise of fall.