An opinionated journal of years of changes at UCO-Part 2

(An unsanctioned look back at UCO--personal opinion)
Everyone has pet peeves and pet projects, I believe. That is certainly true  of the journalists I've known. Certainly of my professor colleagues. And over the years I've realized it is true as well of university administrators, no matter the level.
There's no judgment in that, because pet peeves and pet projects are neither bad nor good on their face.
What I came to value in my years at the University of Central Oklahoma were colleagues and superiors who could be detached enough to view their personal opinions and interests in a fair manner...working to make sure that they could work for the overall benefit of students and the university as a whole.
And I dreaded those who were so self-centered that they could not be fair, would put personal projects and beliefs before the common good. That destructive behavior can harm or destroy  every level of the university, from staff operations, to classrooms,  departments, colleges and the university as a whole. Such unethical existence is the very opposite of the standards of professionalism educated, or any others for that matter, people should exhibit.
Even more dreaded were those micro-managers who would take disagreement or differences personally, and hold grudges and seek vengeance against those who didn't kowtow to all their wishes.
I've known both kinds, and realize every profession have those opposites. We've been fortunate over the years at UCO to have more of the positive people than the negative.
Looking back at the changes at UCO,  in this top-down administrative world of Oklahoma, that is certainly true of the four people who have been president.
I began this journal series, documenting the visual, physical plant changes at UCO which were not here when I started. It's been a continuing process of building, for the most part,  a more student-conscious campus.
George Nigh's pet projects in his five years here served the university as a whole, taking it from a stuck-in-the-status quo world as a commuter college. I may poke fun at all the fake Greek columns and hodge-podge architecture around campus that is part of his heritage, but for the vast majority of his  projects immensely benefited the university.
When Roger Webb took over as president in 2007, serving until 2011, the university was starting to explode in  enrollment, but it lacked needed improvements you couldn't see--infrastructure.
When I arrived, we had one computer in the department. There were no computer labs on campus. Through the early years I cobbled together, missing funds, an early Mac lab. President Webb came to a campus with few if any computer labs on campus, and there was almost no coordination for fees to pay for coordinating and updating them. His hiring and focus on that need changed the way the university operated, and looks.
In addition, I'm forever grateful that he pushed, and then Provost Don Betz authorized, the merger of the Journalism Department and Oral Communication department that housed broadcast. Nigh's addition joined the building, but not the people inside. I'd been working on that needed change for almost five years, and it took a couple more before it happened.
We were fighting against academic turf and tradition, plus years of ill will between the two and unequal distribution of resources to students, but it made no sense to have two separate departments, given the changes in communication. That was my pet peeve and project. We still have a neglected building--student study areas, computer labs, faculty bathrooms, etc.--but at least we're merged, and still working on it.
Thus was born today's Mass Communication Department. It wouldn't have happened if it had not been for Roger Webb and Don Betz.
Webb had his pet projects as well--from his background in law enforcement, and academic turf claims were overrode by presidential fiat (another word I've always wanted to use)--thus the School of Criminal Justice came to be, splitting from Sociology, and the building of the Forensic Science Building, now named after Webb.
When I first came, I was told we'd soon build a classroom building because we needed more space. We still need more space.  Twenty years later, the Transformative Learning Center was built, though not every department has access to its classrooms. "Transformative learning" is one of the principles now enshrined in UCO's mantra, knowing there's more to learning than lectures. Those of us somewhat old sarcastic types claim we've been doing this for years, and jibe at it as the "learning learning" center, since all learning is "transformative." But it's great to have a new building, with great technology and more space. It is really cool.
Other improvements included  a wellness center,  new student housing, and additions to the football stadium, a continuing pet project of administrators, but not of most faculty, nor most students who never attend games. There are many other atheltic facility improvements for other sports.
But sculptures and landscaping improved on campus with increasingly uniform signage.
So here are more photos of the physical changes taking place during Roger Webb's tenure.

The Commons--new student housing north of the library, south of Wellness Center 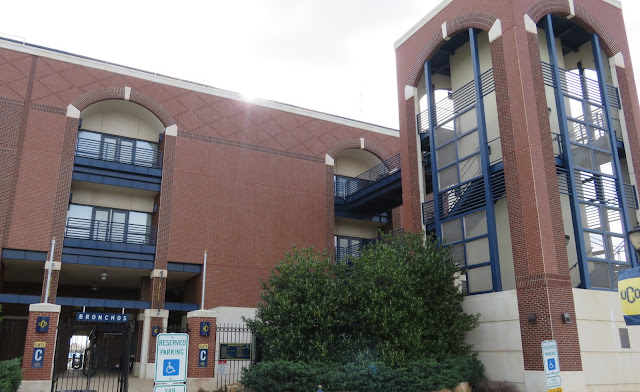 The athletic program makes a concerted effort to attract crowds, but we're not OU or OSU.