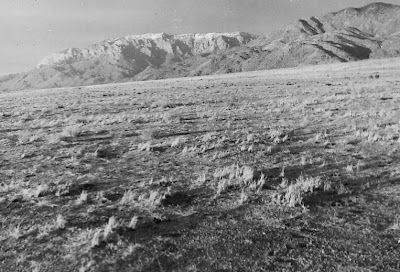 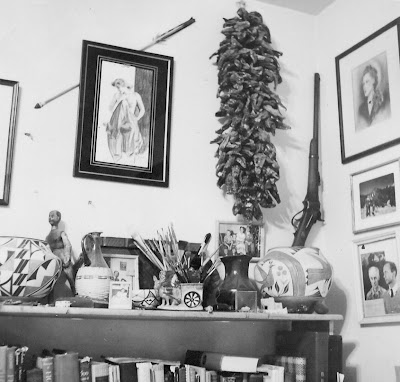 Where I grew up...The Sandia Mountains in Albuquerque in the 50s. All of that open space is covered with urban sprawl today, right up into the foothills, but for me, it was the wide open spaces, a place to explore, to breathe, to see. I could see this from my bedroom window. By the way, Sandia is Spanish for watermelon. they are 10,000 feet high, rising 5,000 feet above the Rio Grande valley and Albuquerque. Coronado and the conquistadores gave them their name in 1540, marching north. when the sun sets and the light is right, the cliffs turn almost red, and the treeline at top resembles a watermelon rine. These are the same explorers who named the mountains where our cabin was as The Manzanos--apples; and the mountains north of Santa Fe the Sangre de Cristo (blood of Christ). Wonderful sunsets and skies and landscapes , and beautiful words in a romantic language almost created--it would seem--to describe them. English isn't appropriate. Is that where I got my love of words?

A corner in our house. I grew up with books and art and artifacts. I don't think I realized until recently those influences. Dad was the artist, and it just sort of got into my blood, like mountains, the southwest, the wide-open skies, and journalism. I wish I had those Acoma pots today. No telling what they're worth. The rifle in the corner is the Sharps .50 caliber buffalo rifle I mentioned in the previous photo of the buffalo skull. It was stolen when someone broke into the cabin.