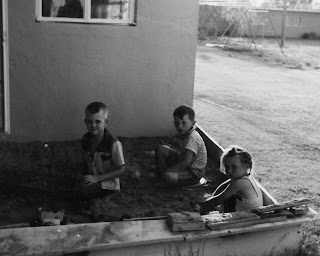 Jerry and friends in the corner sandbox

Remember the sandbox you had when you were a kid?
My brother and I had one in a corner on the backside of the house, with 1 by 12” boards nailed together to complete the square.
We went to an arroyo to get a couple of washtubs of sand, and lugged them home, back when I was in second or third grade, I guess.
Then I had a great place for my toy trucks, road graders, cars. I had a metal pail and small shovel. Perfect for making roads.
Or you could fill the bucket with sand, pack it, and turn it upside down to make an instant castle tower. Make a few more and add some small boards or damp sand for walls, and you had a castle, complete with gates for your toy soldiers to fight around. If you had a toy tank, it could knock the walls down.
It was fun digging in the dirt, making things only a child’s imagination could conger.
There were drawbacks. When it rained, the sand would be wet for days. And neighborhood dogs and cats would leave their offerings.
Worst was when I found a tarantula had moved into one of the corners.
Spiders and bugs were especially bad in a friend’s sandbox, made from an old truck or tractor tire plopped on the ground and filled with sand. The inside of the tire was dark and scary.
But by and large, the ole’ sandbox was an invitation to fantasy and imagination in play with lots of friends.
I’d forgotten about them until I saw a new plastic one out back of a house last summer. Baking in the sun, the sides were bright colors, and all the toys were still there—except they were plastic and not metal.
It lifted my spirit to see that, to know that parents provide outdoor imagination places for children, rather than the mind-numbing television and computer garbage.
But times have changed. Not only do you get ones made with plastic parts these days.
They have retractable plastic tops to keep out the rain and discourage the cats seeking a potty.
My daughter bought one for my granddaughters, but when I visit, I notice the top is off, and the sand is wet from rain. It’s not used as much as ours was, but I note my grandson likes to play in the mud in it. All is not lost.
And no more cheap lumber and free sand. These new fangled ones come in shapes and sizes. You can get them that look like turtles or frogs or dinosaurs or boats and no telling what else.
And you can get colored sand…in bags for a price as hefty as the sand…or buy sand in regular bags. And the costs? Be prepared for anything for $50 up to $150 for the sandbox!
You can get them fancy and add a swimming pool or slides and ladders and all the trimmings…but to me that goes against what a sand box is for…free time for the imagination.
But at least in this high tech world of faddish, expensive computer games with fake graphics killing make-believe people, the fun of constructive creation and digging in the dirt hasn’t disappeared.