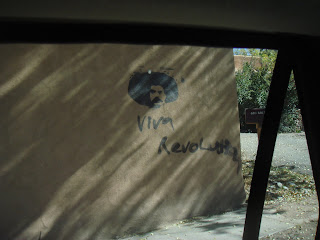 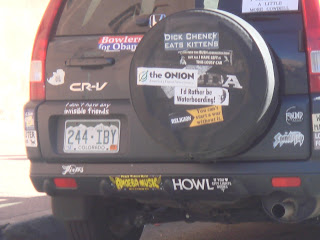 You don't have to be in New Mexico long before you see and hear the First Amendment breathing robustly in the high altitude.

I was shocked last week when we stopped at the visitors center on I-40 and looked up to see the flag flying upside down--a sign of protest or crisis. I wondered what had happened, and went inside to ask. The woman as shocked, said got a maintenance worker to change it, but not before I took this photo.

You don't have to travel far in this Veteran-rich state before you see three flags flying: the American, and state flag with its distinctive Zia sun symbol, and the black POW-MIA flag--usually flying above the state flag and under Old Glory. I missed a photo of that because there was no wind. This state honors its veterans. The mayor of Santa Fe order all flags at half staff while we were there, to honor a local soldier who had been killed in Afghanistan.

And bumper stickers, leaflets and more are everywhere. My uncle Mike says that New Mexicans will protest almost anything. These two other photos are on a car, and painted on an adoble wall in the remote mountain village of Truchas.