My favorite mountains in New Mexico are the Truchas Peaks north of Santa Fe. For some reason they captivate my imagination.

Every time I'm in New Mexico, I have to drive north of Santa Fe toward Espanola, until I get to Pojaque and the turnoff to the High Road to Taos, where I can see the them dominating the horizon.  They're magnetic.

They form the spine of the southern Sangre de Cristos, and are a horizontal spectacle in addition to their rugged height. At over 13,000 feet, they're not the tallest in the state. Mount Wheeler north of Taos is higher, but not as dramatic. It is a massive  hulk dominating north central New Mexico.

I have many photos of the Truchas, and every time I see new ones, I put them in a folder. I've tried many times to paint them, and it's never seemed to work out.

You're  supposed to have an "art word" for a subject, so you can paint what you feel, not what you see. What is the story? these words came to mind, though I've not been able to settle on just one: magnetic, intimidating, dominating, and I guess "rugged" is the closest.

But yesterday, something clicked. I've always tried to paint a large portion of the range, and couldn't come close to capturing their spirit and how they affect me. 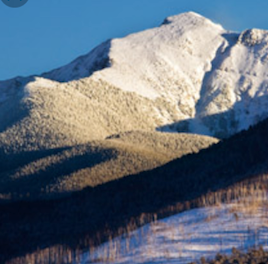 Before I nodded off the night before, I imagined this vertical composition from a larger photo. It's an old journalism adage that a photograph that tries to show too much, shows too little. Cropping is essential.

I did a value sketch, and decided to work with complementary colors--opposites--blue and yellow/oranges, which adds to the drama.

I'm pleased with this, though the longer I look at it, I see faults, or weaknesses especially in the middle ground. But I've already decided to try again, on a larger scale. We'll see.

If you haven't seen them in person, watch the movie "The Milagro Beanfield War" and there are several shots of them, since the movie was shot in the town of Truchas, at over 8,000 feet near the base of the mountains.

Here also is the horizontal view, and the one I cropped to get close to my composition.