Toasting the passage of time 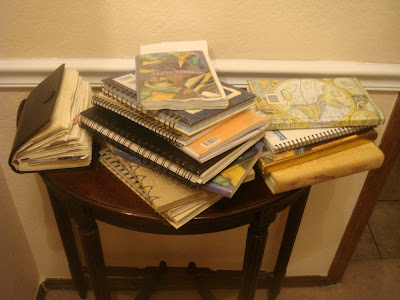 Some of my travel journals...on the left by itself with the black cover bulges the  journal from a week in Paris--full of photos, writing, ideas,comments, tickets and receipts from places visited, maps and more.


Another year, by our relatively primitive calendars...

One of my Christmas presents  from Susan was  Rooftop Soliloquy, by Roman Payne, labeled a novel, of 22 soliloquys written over a two-year span living in Paris.

What a dream, perfect for a new year, I thought and picked it up eagerly. After the first few pages however, I found it is a book I will not finish.

Written in first person, the ideas of that first page were intriquing. I quote:

"It was a time I slept in many rooms, called myself by many names. I wandered through  the quarters of the city like alluvium wanders the river banks....Mine was a world of rooftops and love songs.
"Many friends of old assembled--tried companions, those long-traveled. with stories yet untold. There we gathered beneath the broad moon that hung like a pendant on a string.
"Golden-lipped girls with sleek hair, voluptuous breasts, and eyes slender as pearls strolled in and out of their clouds of perfume....
"We toasted the city and the passage of time...."

Those phrases are about as deep as the book gets. In the rest of the book, the writer, a poet and musician and what the French would call a "rake," wanders from one  day to the next, telling of his poetry and music and number of girls he sleeps with--not in that order. It frankly gets boring, because there's no depth. He spouts similes together like  a string of tattered beads (pun intended), more like diarrhea than imagery (another pun intended). I'll give him this--he works overtime to cram as many as possible on each page, and he's published a book, which I have not.

But in my mind, a journal is supposed to be more than just "what I did today." There should be observations, thoughts, fresh ideas, perspectives, to make the writing worthwhile and keep it from being shallow.


In the travel journals I've kept--whether in Paris or Italy or Mali, or on the way to New Mexico or Montana or elsewhere, a brief account of the day's events is great, but just taking time to sit down at the end of the day, or at breakfast, and think, and write, is more valuable. My students on our  New Mexico study trips produced some of the finest writing, some of it literature quality, from their experiences and observations. Susan and I have found that our journals from traveling can be picked up again years later and read...bringing back exact times and places and meals and everything else. We collect receipts, tickets, photos, menus, maps, and other scraps of information from where we've been, and paste them in those journals along with the writing. Reading our journals is like going on the trip again. Our observations add meat and humor to them.


If you think of the great journals of history, the ones that come to mind for most Americans are those of Lewis and Clark. They're historical treasures, not because they kept writing about themselves, but the world around them. I can remember the trip to Glacier Park in Montana that son Travis and I took about seven years ago, tag team driving. When he was driving--much of it up the Lewis and Clark trail on the Missouri River, I would be writing in my journals, and the imagination flowed from my pens.
There is a Gospel song, taken out of context, that springs from those pages: "Precious Memories."

I'm not a diary keeper, like my Dad, but as we end this year, and we take stock of where and when we've been, journal thoughts are important. I guess that's why I'm a journalist, in the original sense of the word.

Instead of regretting getting older, such journals help us "toast the passage of time." 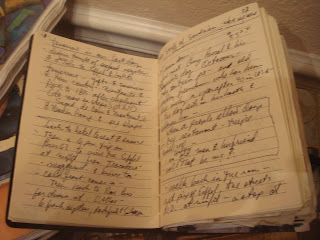 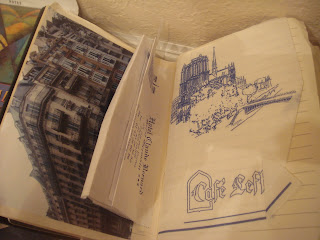 Rich Pages from the Journal of Paris