Uncles, and aunts, are special 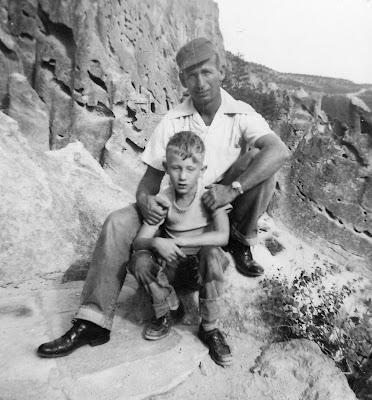 Uncle Mike and Terry Mike, a long time ago at Bandelier, N.M.

When your parents come from big families, you have lots of aunts and uncles, and I think each child has favorites.

I only have one uncle left, Mike Clark of Santa Fe. He was the fourth of five brothers, and I guess it says something about the relationship of brothers that my middle name comes from him. After dad--Terrene Miller--was Louis Wells, Rex Thweat, Mike, and Champ.

On my mother's side, my last uncle, E.T. Culp, died this past year. My mother's other brother , J.C., died many years ago, and her three sisters Gladys, Ima and Vera--have long been dead too. I wasn't as close to them as I was the Clarks, primarily because they all lived in Texas and I grew up in New Mexico. My favorite aunt was  Vera, known by all as Sissie. She had a dry sense of humor and helped raise me in the early years.

Mike has been in and out of my life several times, but he always seemed to come "home" to visit us in Albuquerque. From him, I learned not to smoke...that's another story. And I gave him the mumps when he was visiting one winter. There are a multitude of other stories. In these past few years, now that his traveling days are done, and my life has changed, it's my turn to visit him as often as possible.

There I learn a lot about my Dad that I didn't know--about his school days, how he hit a coach, how he stood up for his younger brothers, how he lost his leg under a train, and a thousand things he never talked about or I didn't ask him--gone forever now except for Mike. Mike looks a lot like my Dad,  and we play chess and I listen to stories of this world traveler, teacher and Navy combat veteran of both WWII and Korea.

My grandchildren already love their uncles and aunts, especially "Uncle TaTa," Travis. But I know that Uncle Vance, Aunt Dallas and Uncle Derrick will be special to certain ones of them as they grow up and gather memories, along with Aunt Kerin, Uncle Todd and Aunt Naomi. Both Mike and Sissie were single, as is Travis, and I think that helps cement a special bond with nephews and nieces. I know my children have special love for Aunt Janice, also single.

Years from now, I think my grandchildren will come visiting their aunts and uncles, asking questions about their parents, learning more about the family that only oral stories seem to be able to preserve.