When the sun stands still... 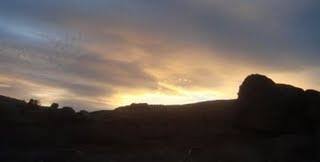 Another day at Chaco

The shortest day of the year, the beginning of "winter."

We "civilized," scientifically educated types don't pay much attention to it any more. Just a day on the calendar. and six months from now on June 21, we'll ignore summer solstice just as we do the fall and spring equinoxes...when the days and nights are of equal length. Official beginnings of the seasons on our calendars.

...but it hasn't always been thus, and the calendars have changed, just as we have.

Ancient peoples (don't call them "primitive")--all around this tilted, spinning, orbiting world--knew these dates intimately, measured them, marked them, remembered them...all without all our fancy technology--atomic clocks and telescopes and calculus and more.

They spent a lot of time looking at the skies, especially at night, studying the stars. They spent years marking the path of the sun across the daytime skies. Think about the patience, the intelligence, the determination. In the oral cultures without a writing record, what they did boggles the mind...whether the Druids at Stonehenge in England 4,400 years ago, or the Anasazi in New Mexico, 1,000 years ago. In literate civilizations like the Egyptians, Incas and the Mayans, the results are even more astounding and complicated. Their writing in stone still amazes and influences us. Even a movie this year seeks to cash in on Mayan knowledge: "2012."

Every culture in the world has marked the meanings of solstices with celebrations or rituals or worship or sacrifices. We have sacrificed the solstices to scientific facts, devoid of meaning.

Consider how long it took the Anasazi of New Mexico at Chaco Canyon to construct their highly accurate sun dagger atop Fajada Butte, measuring solstices, equinoxes and even lunar cycles? You would make a mark one year, but need to wait another to confirm it. What if the skies were cloudy? The kivas and the roads and walls all fit into geometric and celestial coordinates. Yet they accomplished it, and only because it was somehow extremely important.

In pre-Incan South America from about 1000 to 1300 AD, they found the precise location of the equator...even better than modern science did until we got satellite GPS technology. Those people built a semi-circular wall on the top of a hill. One end was precisely on the equator. And a line to the other end of the wall forms a 23.5 degree angle--the precise tilt of the earth's axis that causes these seasons. By the way, this location is 1,000 feet north of the "true equator" measured by civilized French astronomers in the 1700s. For the scientific record, the equator is where no shadows are cast on the equinoxes. The sun is perpendicular.

At Chichen Itza in the Yucatan of Mexico, the Pyramid of Kukulkan built about 1050 was used as a calendar: four stairways, each with 91 steps and a platform at the top, making a total of 365, the number of days in a calendar year. About 1,000 before Archbishop Usher of Armagh concluded from The bible that creation occurred at 4004 B.C., the Mayans had calculated the cosmos was 90 million years old. The result was an extremely accurate calendar that predicted the coming of eclipses and the revolutions of Venus to an error of one day in 6,000 years. Think of the years and study and knowledge required just to get the measurements exactly right before building the pyramid...the please the god and to be able to survive.

Why? When you are people of the earth and the skies--not of air-conditioned, manufactured concrete and glass insulated environments--knowledge is survival...when to plant crops, when to harvest, when to "lay by in store" to keep from freezing or starving to death in the "famine months" of what we call "winter." And since you are insignificant in the cosmos, you need help...hence religion and sacrifices...common to all religions. The god is the sun, the source of life; the earth is the mother, the giver of food, You offer sacrifices on winter solstice to persuade god not to keep dipping lower on the horizon, but to reverse course and come back. At summer solstice, you offer thanksgiving. Life and death have meaning.

Tomorrow, a year ends, and while the sun barely "moves" for a few days--in terms of days getting longer in the northern hemisphere--the great orbit around the sun begins anew--rebirth in the earth, and aging of its creatures.

What are we missing? We don't even know.