Now my son Vance, and Mark Zimmerman and Zach Nash would all say, "That's not a real camera."

It is a Nikon, but a Nikon "Coolpix."  What kind of real man's camera is named a "Coolpix," I ask myself. And really, I've had little Sony point and shoot for a couple of years. smaller than a package of cigarettes. I use it for snapshots of the grandkids, and for reference shots for my watercolor paintings...very adept at snapping photos as you drive down the Interstate in New Mexico at 75 mph and getting quick stuff. In fact, many of the photos you've seen on this blog came from it. Nothing like a Carl Zeiss lens.

But it's tax deduct time, and ever since children Vance, Dallas and Derrick got advanced versions of  those cameras, with real telephotos and more features, and video capability, I've wanted one. So that's how I ended up with this new one yesterday, my Christmas-birthday present to myself.

And it's really "cool" all the things that it will do...and not as big as the standard 35 mm electronic versions that Nikon, Canon and others put out. The older and heavier I get, I detest carrying heavy stuff around.

But then I started reading the instruction manual. Yes, I can take a photo already, but then there are all these little icons that show up on the screen...and I have to figure out what they mean--a trip to the manual. And I can't download them yet, because while I've read part of that manual, there are some instructions that aren't clear...computer stuff, you know.

Digital photography is terrific for many uses, I know. Younger generations already take it for granted. As soon as you take his picture, two-year-old grandson Max Bell immediately says, "See!," demanding to see the instant image. Photojournalism has been revolutionized by its immediacy, commerical photography by its variety and flexibility.

Then I thought about my old metal Nikkormat 35 mm camera from the late 60s or early 70s, out in the cold of the garage, in some box. I never had to read the instruction manual. Tri-X 400 film at f11 and 1/250 of a second, focus, and you WILL get a photo. It was simple to load and use and while darkroom took some time, the instructions for it and the darkroom were the same as all the other cameras. And no cute icons. Sure, it weighs more than several of the new ones put together, but the battery never discharges so the shutter won't work. (You don't need the exposure meter's little battery--because of long use, you can literally almost "point and shoot.") And there's that reassuring "slickkkk"" when the focal plane shutter captures a moment. Even though you can't see the image instantly, when you've taken a really good photo, you already know it, can see it in your mind, and excitement builds as you wait for the negative to be developed.

Of course, I'm still excited about this newfangled camera and its use this coming year. Now if I could find which box the old Nikkormat is in, and if I could figure out how to disengage the computer virus protection so I could install the new camera's software, I'd take a photo of the Nikkormat  with the Nikon Coolpix, and, reading the instruction manual, figure out how to download it, save it, and then post it with this blog. 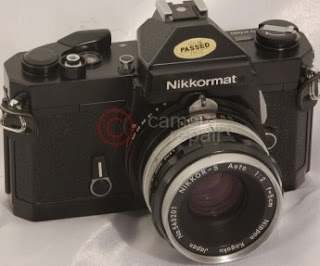 Nikkormat, from an online ad--

One professional in Michigan writes: