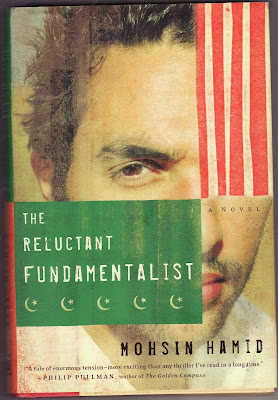 I picked up another book from Susan's pile near the bed. Hadn't seen it before, and while I usually avoid books about the Mideast and our current world turmoil, this one caught my eye.

The Reluctant Fundamentalist, is by Mohsin Hamid, a Pakistani who lives in London, but attended Princeton and Harvard, and has won numerous writing awards.

I've never read anything like this. It's a short novel, 182 pages, and gripping and unique in structure.

The entire book takes place in one afternoon and evening, as a Pakistani  is talking to an American visitor at a cafe in Lahore, Pakistan.

What sets this apart is that all you read are the Pakistani's side of the conversation, as he tells his stories and responds to the others' comments, to the coming of food, to the bats in the skies, to the coming darkness, to the politics of 911. The guide is a Princeton-educated professional, working in the US when 911 happened, trying to be an American. What you glean from this, as he tells his stories of work, love, family and his internal struggles is an understanding of the Muslim views that have embroiled us in another unending war.

Opening lines:  "Excuse me sir, but may I be of assistance? Ah, I see I have alarmed you. Do not be frightened by my beard; I am a lover of America."

The book is pretty straightforward until almost half way through,but after 911, the story unravels quickly, as does the narrator's life in America. It gets complicated, but moves quickly, and there are some interesting observations and insights.

On going back home to Pakistan: "...it occurred to me that the house had not changed in my absence. I had changed."

On history: "...and in history, as I suspect you--an American--will agree, it is the thrust of one's narrative that counts, not the accuracy of one's details."

On America: "I had always thought of America as a nation that looked forward; for the first time I was struck by its determination to look back. Living in New York was suddenly like living in a film about the Second World War...."

On changing: "...my blinders were coming off, and I was dazzled and rendered immobile by the sudden broadening of my arc of vision."
"...it is not always possible to restore one's boundaries after they have been blurred and made permeable by a relationship."

Reading an alumni magazine" ...I would squnt intently through such pinholes into the life I had left behind...."

And my favorite phase: "I responded to the gravity of an invisible moon at my core, and I undertook journeys I had not expected to take."

I won't tell you how it ends, other than it leaves you hanging, primarily with lots of intriguing thoughts and some disturbing emotions as an American. The book is a journey indeed.