Here's to the Navy! 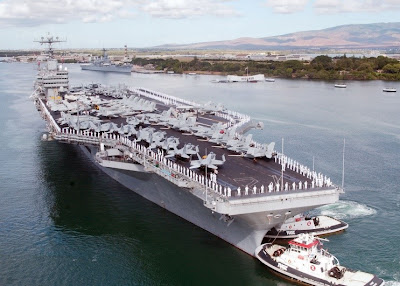 The nuclear aircraft carrier, U.S.S. Abraham Lincoln, arriving in Pearl Harbor. In the background is the white U.S.S. Arizona Memorial, and beyond, the U.S.S. Missouri.
'Twas great visiting with Lt. Comdr. Steve Curry, U.S.N., Thursday. Steve, friend and former student extraordinaire, is based in that great seaport, Omaha, after worldwide assignments and duties, including Sicily, Vladivostok, and elsewhere. He was on his way to his hometown metropolis of the high plains, Plainview, Texas, to visit family. Soon, he'll be aboard the nuclear carrier USS Abraham Lincoln. (No, not in Omaha, in Everett, Washington.) Anchors a' weigh!

The Navy and I go way back, since my uncle Mike, where I got my middle name, is a WWII and Korean War combat vet in the Navy. As a kid, I made model ships, collecitng a virtual navy of my own,  and dreamed of being a sailor.

Steve loves the Navy, is proud of his country and thinks he's got the best job in the world.

My son Vance, in the Air Force, says "I work for the best organization in the world." When Vance was stationed in Hawaii, he got to visit the Abraham Lincoln at sea.