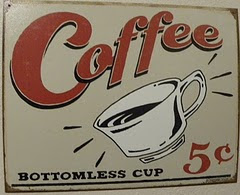 Sign hanging in the utility room of Dr. and Mrs. Todd Bell, my daughter and husband's house, in Amarillo. Todd is a major coffee drinker, which is just one more reason he's the worlds best son-in-law.


“Don’t knock our coffee. You may be old and weak yourself some day.”
That printed sign hung on the wall behind the counter of the All Nite Café in Comanche, Oklahoma.
Long before statehood, Rock Island changed trains crews there, and kept the café on Main Street in business. It was owned by ancestors of mine, who first moved to “The Nation” (Indian Nation) from Texas.
My grandfather, Erle Thweat Clark, soon followed his relatives to the little red clay town in south-southwest Oklahoma, located on the still fresh ruts of the Chisholm Trail. He owned a grocery story, sold coffee, and painted houses for a living.
And coffee’s been on the burner and in my genes ever since.
Granddad always drank coffee in the mornings, after he’d put on a white shirt and tie and lit his first Camel. Dad and Mom drank coffee for as long as I can ever remember. When I was a kid, the Jewel Tea man’s truck used to pull up in front of our house on the outskirts of Fort Worth, and they’d buy strong coffee with chicory from New Orleans. Later, when visitors like my Uncle Mike would come visit, they’d stay up all night talking, having eggs and bacon and coffee well after midnight.
I started drinking it as a teenager. It developed into an addict during all-night college cram sessions and in working on newspapers at all hours of the day and night.
Now that I’m getting close to being old and weak, I’m trying to cut back—not quit mind you—just limit myself to less than three pots a day—no matter what time of day.
But when I do get old and weak, you can be assured—as the folks in my office will tell you—my coffee won’t ever be old and weak. It’ll be strong, 24 hours a day. When I make coffee, I don't use little measures. I just pour it in till it looks right, and then add some more "for the pot."
When I die, they wont have to embalm me—my veins will be full of caffeine.
The folks in the All Nite Café in Comanche, Oklahoma, almost 100 years ago, would understand.