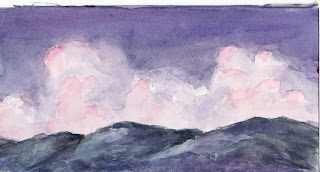 In August, the "monsoon" season in northern New Mexico, the thunderclouds build up over the Sangre de Cristo mountains in the afternoons and evenings. Sitting on my uncle's front porch in Santa Fe, the glow turns the mountains red, and then as the sun sinks lower, the clouds catch the last light of the day.

The Sangre de Cristos are aptly named. It's Spanish for the "blood of Christ," named by the conquistadores and their Franciscan frairs when they first marched up the Rio Grande valley in 1540. This is a view they would have seen. By the way, Santa Fe celebrates its 400th anniversary next year. Santa Fe is the oldest capital city in North America and the oldest European city west of the Mississippi.

Santa Fe has the oldest public building in America, the Palace of the Governors, and the nation's oldest community celebration, the Santa Fe Fiesta, established in 1712 to remember the Spanish reconquest of New Mexico in 1692.

The city has been the capital for the Spanish "Kingdom of New Mexico"; the Mexican province of Nuevo Mejico; the American territory of New Mexico (which contained what is today Arizona and New Mexico); and since 1912 the state of New Mexico. So it's been a part of the United States only about a third of its existence.

Before that, the area was occupied by a number of Pueblo Indian villages – mostly the Tewa people, descendants of the vanished Anasazi of Chaco Canyon and other sites on the Colorado Plateau to the northwest.

Today, it bills itself as "The City Different." It is one of only two state capitals without scheduled airline service (Vermont?). Strict zoning prohibits architecture that does not reflect the Spanish adobe motif, and property is very expensive. I priced a two room adobe there--without indoor plumbing, at over $200,000.

New Mexico is always brewing in my coffee pot