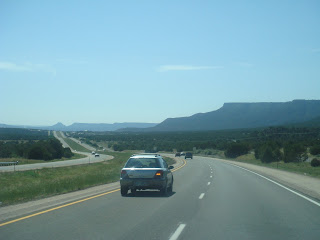 Heading east from Santa Fe on I-25, on top of what was once US 66, and underneath that, the ruts of the Old Santa Fe Trail. In the distance, Starvation peak.


Trails plowed under...That's the name of a book about Charlie Russell, the great western artist, referring to the white man's settlement that obliterated the buffalo and Indian trails of the northern plains.

I think about those vanished trails every time I head to New Mexico down the latest trail, I-40, a concrete river transporting thousands of trucks a day. I once counted 20 trucks in one mile of that road. Let's see, multiply that by 500--the distance between Albuquerque and OKC, and you have 10,000 of the diesel fume-spewing monsters barrelling down the road on that stretch. That's not counting those in the truck stops or rest areas. And that's only one stretch. Multiply it by the length of I-40 from coast to coast, and all the other Interstate, and it boggles the mind.

It's hard not to compare the truck traffic to trains, but Larry McMurtry, in Roads, correctly compares Interstates to the rivers of early America.

Alongside the Interstate run their predecessors, the rail lines, carrying containers and coal, but ghosts of their former selves in terms of commerce and people. The old depots are largely vacant, haunted by memories, like the one at Tucumcari on the north edge of town. The rail yards are still there, but they're not the center of the the town any more. I-40 on the south edge of town is. I've gone back to those rail yards, wondering what kind of day it was when my future father, then 18, tried to jump a freight in 1932, and slipped and the wheels sliced off his leg and a little finger as he tried to push himself away.

I-40 has pretty well plowed under another trail, old US 66, although Oklahoma has a huge amount of the original concrete left. And the "Mother Road" of Steinbeck and Okies jogged up through Santa Fe in its early years. I've been up and down that road many times in my life, growing up in Albuquerque, and visiting relatives in Oklahoma, and coming to college here, and going back to New Mexico over and over again.

On its way to Santa Fe, the old road is plowed under by another Interstate, 25, heading south from I-90 at Buffalo, Wyo., to Cheyenne, Denver to Santa Fe, Albuquerque and Las Cruces and I 10, just north of El Paso. That Interstate has plowed under another trail, the Old Santa Fe Trail that brought Americans and their goods overland from Missouri, some though the Oklahoma panhandle, the others over Raton Pass, into Mexican territory in the 1800s.

I-25 south of Santa Fe follows another trail, El Camino Real, the royal road from the Spanish capital of Mexico City to its northern capital.

I cover in hours and minutes what used to take earlier travelers weeks and months. What will plow the current trails under?