Where's my pen and paper? 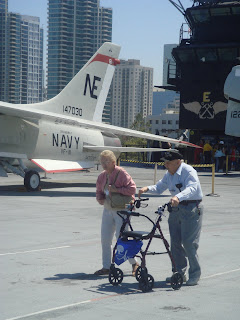 Every time I leave them behind, I regret it, even on vacation.

There are so many stories. All you have to do is look, and listen, and write. A picture is worth a thousand words, but you need the words too.

That's what I thought when I toured the USS Midway museum in San Diego. Yes, I took my little Sony digital camera, but not my pen and paper. Oh the stories.

This couple were shuffling across the long flight deck. the old Navy veteran and his wife. Can you hear him telling about when he served on this ship, sometime in its 47 year span between 1945 and 1992?

Down on the hangar deck, amid all the displays, another vet, in a bomber jacket with an American flag on the shoulder, and a veteran's camp on his head, was pointing to the list of carriers, telling three other people about that. "See, that's the Essex class, and it was CV 19. Down here was the Lexington. That was my ship."

I wasn't the youngest person on board. Daddies and Moms and their children were on board too, looking at the aircraft...the jets on the flight deck, some World War II craft in the hangar down below. One little boy was dressed in a dark blue Navy enlisted man's uniform with a sailor's hat on his head. He got a lot of attention from the veterans. I bet his Daddy was a navy vet. But a majority were the aging vets, from WWII, Korea, Vietnam. Wandering around, telling stories.

The guides to the tours on the island, where the captain and the air boss rule, were Vietnam vets...men my age.

I first went aboard to see the ship and the aircraft. I've long been in love with the Navy, since my favorite uncle, today the last surviving member of the Clark boys, served in both WWII and Korea. And then to see the planes, thinking about my oldest son in the Air Force. I cant' tell you how many air shows we went to when he was young. He still loves military aircraft.

But then I saw the vets. Oh the stories. Where's my pen and paper?